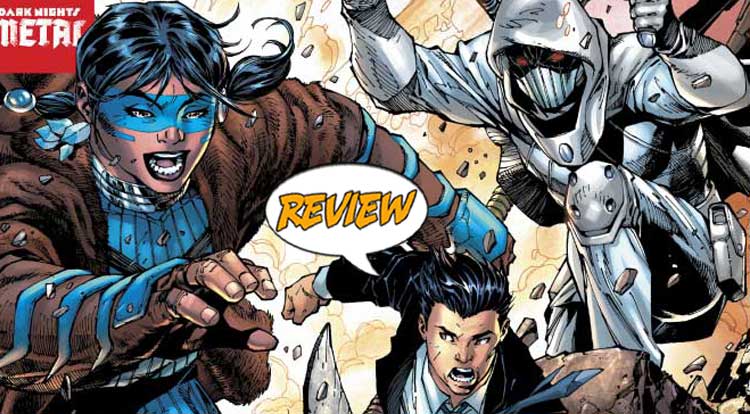 The secret cabal known as The Immortal Men have set their collective sights on one Caden Park.  But is Caden already working for the other side?  Your Major Spoilers review of The Immortal Men #2 awaits! Previously in The Immortal Men: “Following the destruction of their base of operations, the Immortal Men find themselves on the defensive!  Their only hope rests with an emerging metahuman named Caden Park – but the evil Conquest has gotten to Caden first!  Will the remaining few battle-ravaged Immortal Men be able to rescue their young would-be savior?  And what connection do Caden’s tactile telepathic abilities have to the survival of humanity?”

SOMETHING STRANGE IS AFOOT

We pick up with a bang right where last issue left off, with Caden Park in the subways, under attack by a group of strange, lumpy things that clearly want to eat him.  Fortunately, he’s not alone, as a group of strangers has arrived to defend him, but… they’re not normal.  We get our first glimpses of what’s going on with the other Immortal Men, with quite a bit of information devoted to Reload’s backstory, discussion of Timber’s past as a folk hero and Stray being a genetic experiment of a 90s bad guy called Doctor Cryptid.  The immortal heroes save Caden’s life, but young master Park makes a run for it, discovering the streets of Manhattan are impossibly empty.  When his cab driver seems to be in on the whole thing, all seems lost.  But quick intervention by his bodyguard once again snatches Caden from the jaws of death, and reveals that his parents are more than they seem as well…

“THIS BREAKS EVERY IMMORTAL TREATY, GOING BACK 6000 YEARS!”

First and foremost, I want to stress that the weird facial features and body proportions seen on the cover are NOT seen on the interiors.  That’s a good thing, as Ryan Benjamin’s work is actually quite well-done, even as it borders on some of the worst excesses of 1990s comics.  The facial features are well-done, and even Stray (whose face looks like a cartoon animal, presumably by design) ends up looking quite good under his pen.  Tynion’s script this issue helps to shed light on some of the mysteries set up by issue #1, without revealing everything, and there is a genuine sense of jeopardy in the multiple attacks on Caden’s life, though by the end of the issue, it feels a little repetitious.  That may be a side-effect of working Marvel-style, from plot outline rather than full scripting, but it doesn’t completely undermine the drama of the story.  This issue also avoids the problem I had with last issue, in trying to figure out whether or not Timber actually was giant or just in the middle of a poorly-laid-out panel.

This issue also reveals the Immortal Man for the first time (he’s the bearded fellow I thought might be Vandal Savage last time around), making it clear that they’re going to be using the DC Universe’s large stable of guys-what-live-forever in these pages.  The Immortal Men #2 is an improvement over the debut issue, and the creators have put in the work to make the characters interesting, so I’m hoping we see this book hang around for a bit, if only until I find out what’s up with my favorite character, Timber, leaving this comic with a well-deserved 3.5 out of 5 stars overall.  This is a literal example of not judging a book by its cover, as Jim Lee’s art on the front is the weakest part of the entire package…

Mysteries are revealed, and the art is quite good. If only we didn't have that cover (and maybe more of Timber!)