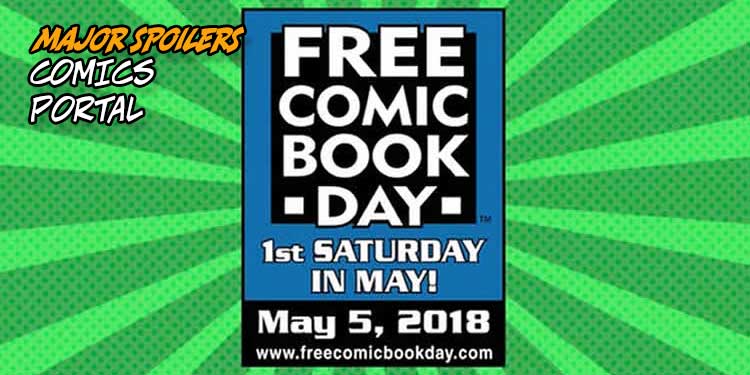 Once again, it looks like Free Comic Book Day has accomplished its main goal – to bring awareness of local comics shops wherever it is held.

It has turned into a yearly event that helps the industry reach out to new fans and those who may have stopped reading comics for whatever reason.

I hope it (and the related event Halloween ComicFest) will continue for many years to come!

THE INTERNET IS FULL OF GREAT STORIES AGAIN It’s fun to get to experience the comics universes from different perspectives as I get to do. This year, I was in Fort Myers, FL, at Comics, Cards & Stuff, and it was another great time meeting folks from that area as well as seeing people who aren’t as familiar with the industry discovering it.

The store opened at 10 a.m., and there was a line waiting to get it the door. Due to space concerns, the folks there only let in enough people to fit inside. Fortunately, the weather cooperated until about 2:30 p.m. when the line had diminished.

There were many fans of Stabbity Bunny (Richard Rivera’s creation I often help with during events like this) as well as folks who had never heard of it before. It’s great to talk with people in all parts of the fan spectrum!

Apparently, last year was busier than this one, with the folks in charge talking about the fact that last time had them running constantly. This time, not so much, but they still did well. They worked hard to make sure they had all 52 comics there for fans to find, although they did limit everyone to 6 per person, much like other shops.

One quick story I should share – there was a young boy wearing a Venom shirt and dark pants who was walking around with his Mom. He didn’t see the cosplayer in the outstanding Venom costume behind him until he turned around after that fake extended tongue touched his back. Let’s just say that he eventually did take a photo with him after the shock wore off, but other than that, he avoided contact with Venom while they were in the store! Funny stuff!

I’ve looked at lots of reports from the U.S. and abroad, with more great photos than I could ever post here. Once again, FCBD was a resounding success overall!

IF YOURS DIDN’T WORK OUT SO WELL…

I often talk to store owners who struggle to get past the “Free Comic Book Morning” situation. You know, people rush in once the doors open, grab their free stuff, then run out the door, often leaving a few comics here or there and the cash registers silent.

When talking with successful stores, I often notice a couple of common threads.

WILL THIS HELP COMICS?

My home store, Krum’s World Comics and Collectibles in Winter Garden, FL, had another great FCBD, even though I wasn’t there to participate (or because I wasn’t there). I saw one example of how things went on Facebook, and it’s worth mentioning.

A family who had never been to an LCS came there, and the folks who own the store, and their staff, were very friendly and helpful when these people came in and were clearly asking questions that showed they were new to comics. Instead of making them feel left out, as some stores might do, they made them feel part of the festivities by being friendly and answering their questions without talking down to them. Afterward, they even went on Facebook to thank them!

That’s the kind of thing that I think makes FCBD such a success. For some reason, people look at comics fans as kind of snobbish at times, looking down at people who don’t “get it” like they do. When they actually go in and find people like them in that they also enjoy something outside themselves (as many do), they’re often surprised, though they shouldn’t be.

That’s the kind of thing that I think makes FCBD such a success. For some reason, people look at comics fans as kind of snobbish at times, looking down at people who don’t “get it” like they do. When they actually go in and find people like them in that they also enjoy something outside themselves, they’re often surprised, though they really shouldn’t be.

Now, we just need to work on getting Halloween ComicFest up to FCBD levels, and I’ll be a happy guy!

What do you think? What was Free Comic Book Day like in your local store? Are there ways it could be improved for next year? Whatever your opinion, be sure to share it in the space below!