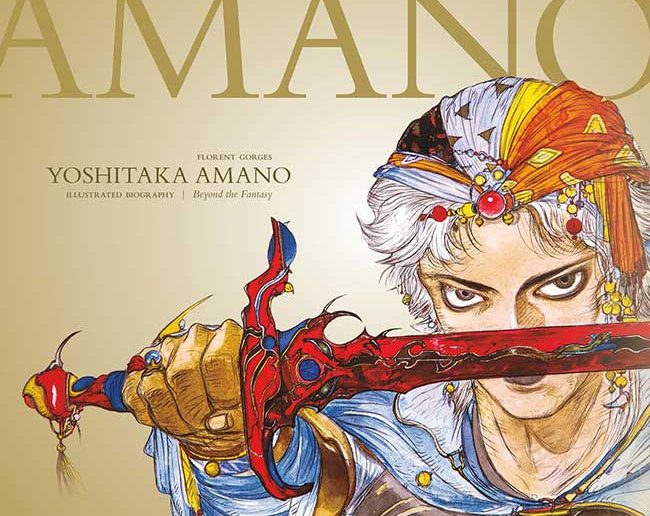 Yoshitaka Amano: The Illustrated Biography—Beyond the Fantasy to be released by Dark Horse Comics

Dark Horse is thrilled to reveal details from the upcoming Yoshitaka Amano: The Illustrated Biography—Beyond the Fantasy. Author Florent Gorges (The History of Nintendo, Vol. 1: 1889-1980), one of France’s leading video game historians, sets out to explore the 50 years thus far in the career of legendary artist Yoshitaka Amano (Final Fantasy).

Yoshitaka Amano: The Illustrated Biography—Beyond the Fantasy is a beautiful celebration of the life and imagery of Japan’s master of fantasy and science fiction art! This handsome, landscape-style hardback contains nearly 400 illustrations and photos from the incredible career of Final Fantasy designer Yoshitaka Amano. But Beyond the Fantasy covers far more than just the famous game series. Amano’s artistic journey goes back to his first job in 1967—age 15, working on Speed Racer! From animator to illustrator, to internationally exhibited painter, this biography is a look not only into the work of Amano’s life, but the influences, techniques, philosophy, and family that have nurtured it. The Yoshitaka Amano: The Illustrated Biography—Beyond the Fantasy Limited Edition is a must-have for any Amano fan. Its three colors, black, red, and gold, are designed to evoke Amano’s own favorite hues—and his father’s traditional lacquerware craft that influenced him from childhood!

The black slipcase of the Yoshitaka Amano: The Illustrated Biography—Beyond the Fantasy Limited Edition contains not only the same 328-page gold hardback biography from the regular edition, but also the elegant red 96-page Yoshitaka Amano—Paris Sketchbook, a landscape-style softcover with French flaps. The Paris Sketchbook follows Amano through the famous city in a photo essay, collecting the sketches of the people he made along the way!

Besides the gold and red books, the Limited Edition also contains a portfolio with a region-free Blu-ray (subtitled in English) featuring almost three hours of talk and interviews with the creator and the documentary makers, containing bonus information and archival images not in the biography. You’ll walk with Amano through the streets of Paris, shop with him for drawing supplies and art books, and experience a “live draw” in his studio, showing Amano’s exact technique from blank sheet to finished Vampire Hunter D painting! A mini-lithograph of the painting and a Final Fantasy illustration is also included in the portfolio—and finally, the Yoshitaka Amano: The Illustrated Biography—Beyond the Fantasy Limited Edition features an individually signed card from Amano himself!