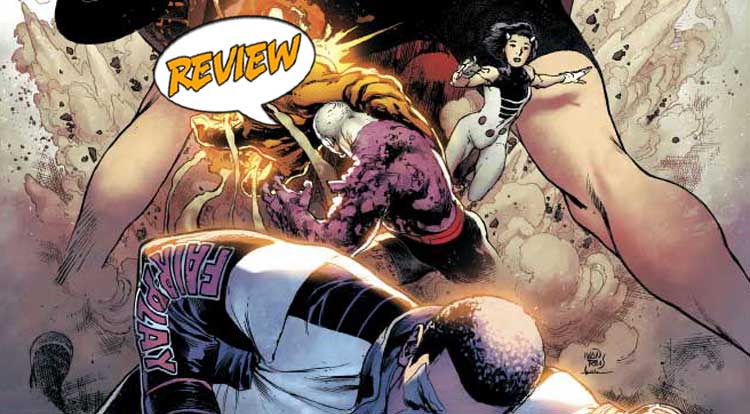 Thanks to the energies of the Dark Universe, our four heroes find themselves tied together by fate.  And also dark matter…  Your Major Spoilers review of The Terrifics #3 awaits! Previously in The Terrifics: “When will this superhero team bound by dark multiversal magic ever get any privacy? It certainly won’t be today, because while Mr. Terrific feverishly works to free himself from Metamorpho, Plastic Man and Phantom Girl – but mostly Plastic Man – the team must also contend with the towering, rolling death-inferno that is the War Wheel.”

We open with the startling revelation by Mr. Terrific that, thanks to the radiation they encountered in the alternate dimension, that our four heroes cannot be more than one mile apart without something terrible happening.  This turns everyone’s attitude on it’s head, with the friction between Metamorpho and Plastic Man amping up, Phantom Girl overwhelmed by frustration and fear at being freed from one prison into another…  And Michael Holt becomes a complete jerk to everyone.  Staying at Stagg Industries doesn’t help, as Metamorpho has a fight with Sapphire and the team is forced to fight one of Stagg’s inventions, a device known as The War Wheel.  (If you’re keeping track, the original War Wheel was a Nazi weapon that fought The Blackhawks back in WWII, which casts a shadow on Stagg’s intentions in my eye.)  Their battle proves that they work well as a combat unit, but as the issue ends, everybody is super-irritated and Mr. Terrific reveals that the reason for his distracted jackassery is actually another mystery…  The mystery of Tom Strong.

WHY IS MR. TERRIFIC BEING SUCH A WAD?

As so often happens in modern storytelling (thanks, I believe, to the “six issues per trade paperback” standard), this third issue kind of grinds things to a halt, and while we do get a nice action sequence featuring the team in action, showcasing Phantom Girl’s new explosive powers, it feels like this issue is all fights.  Granted, if the intent is to emulate classic Fantastic Four, having squabbles and a disengaged jerk genius leader makes sense, but Terrific’s attitude seems to take a sharp turn here compared to previous issues.  Joe Bennett’s art is solid herein, and his Metamorpho is quite impressive (with a little more skull-face to his look before), but I’m not sure what happened to Ivan Reis.  Still, Bennett rendering of Metamorpho and Plas creating a shape-shifting slingshot attack is both gross and hilarious, and I hope to see it become their regular combat move.  Plastic Man also names the team this issue, coming up with the great idea to call them… The Plastics!

Working Marvel-style (plot, then art, then completed issue) can be a difficult game, and not everyone can be Stan Lee.  Still, Lemire does an admirable job in making this issue’s tensions make sense in context, even as the sudden appearance of a not-Nazi super weapon for the ol’ fighty-fighty feels random and the issue’s events feel very much like middle chapter filler.  Still, The Terrifics #3 makes for a better-than-average read with solid action art and believable conflict, earning 3.5 out of 5 stars overall.  The real test of this comic is going to be the dispensation of the Tom Strong plot and whether or not the team can come together to deal with their common dilemma…

The group dynamic is causing friction and this issue feels like it's spinning its wheels a bit, but it's still a pretty good comic.