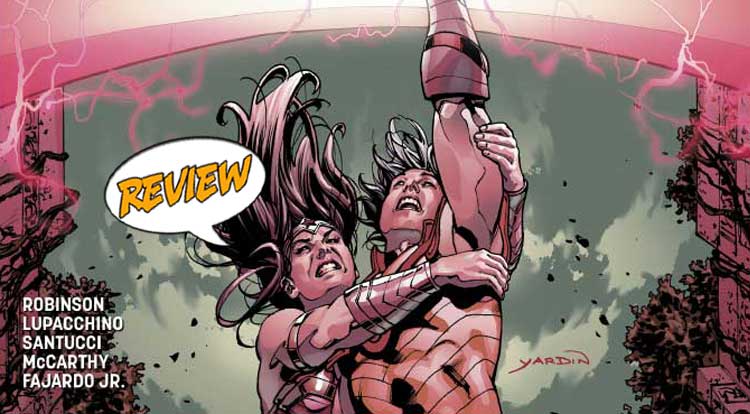 The war for Themiscyra rages on, but Jason may have the weapon to bring it all to an end.  But isn’t this someone else’s book?  Your Major Spoilers review of Wonder Woman #45 awaits! Previously in Wonder Woman: ” It’s all-out war for Themyscira!  Jason’s been handed a gift from the gods that could turn the tide… but how will he use it?  And is this gift actually what he believes it to be?”

IT’S ALL ABOUT JASON

We open with a moment that sets the whole issue off on a bad foot for me: Wonder Woman, overwhelmed, crying out to Steve Trevor that she can’t prevail against her enemies.  Fortunately for her, Jason arrives just in time to deliver her sword and distract Darkseid long enough for her to gain her bearings.  Seeing Hippolyta fighting against Darkseid’s daughter, Grail, Jason gets involved and finally reunites with his long-lost mom.  Their reunion is short-lived, as Wonder Woman is still fighting Darkseid, suddenly remembering that she is supposed to be about “love.”  I’m not exactly sure what happens next, as she talks to the Lord of Apokalips about her siblings and father, somehow drawing their godly essences out of Darkseid and depriving him of the power boost necessary to his plan.  Somehow, the day is saved, Jason gets a magic spear, Grail is taken into custody by the gods themselves and a mysterious man walks away in the last pages, but I’m not sure who he is or is supposed to be.

CAN’T MAKE HEAD NOR TAIL OF THE PLOT

This issue is scattered all over the place, but the biggest problem for me is the focus on Jason and his deal in the middle of what should have been a personal battle for Wonder Woman and the Amazons.  There are several points in the story that I’ve now read five or six times and I still can’t follow exactly what is happening in the pages, which is not a failing of the art.  The multiple artists do affect the story, though it’s not a matter of consistency so much as one of setting, which feels again like a weakness of the writing.  When an issue doesn’t work, there are often a lot of possible reasons why, but every weakness I find in these pages (indistinct plot, no sense of danger or urgency, an out-of-character Wonder Woman, the Poochified use of Jason) seems to spiral back to James Robinson.  I am not usually the guy who tries to figure out motivations or put words in the mouths of the creators (Fallacy of Creator Intent, blah blah blah fishcakes) but it doesn’t feel like he really wants to write a Wonder Woman comic book…

BOTTOM LINE: THIS…  IS NOT GOOD

I like Wonder Woman under a lot of writers, and even the New 52 version of Diana, with its multiple pitfalls, dumb decisions and weird choices that seem to imply that nobody in DC editorial really knows what makes her tick, has had bright spots and really strong issues.  Wonder Woman #45 is not one of them, and the competent work of the fleet of artists can’t overcome the lack of focus, impenetrable plotting and misuse of the main character, leaving the book with a disappointed 2.5 out of 5 stars overall.  Here’s hoping that next issue’s new plotline is the whole new start the book desperately seems to need…

The art is quite good, but the story alternates between nonsensical and condescending, sidelining the main character until it intentionally mischaracterizes her...