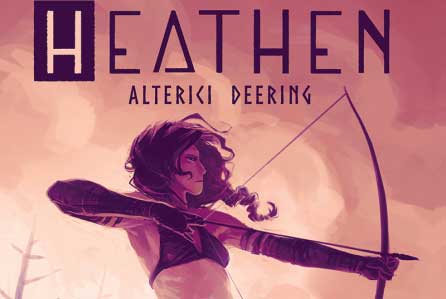 Heathen to the big screen

Vault Comics has announced Heathen from creator Natasha Alterici has been optioned by Constantin Film AG to be adapted into a film.

HEATHEN follows Aydis, a Viking, warrior, outcast, and a self-proclaimed heathen. Aydis is a rescuer of the immortal Valkyrie Brynhild and battler of demons and fantastic monsters. Aydis is a woman. Born into a time of warfare, suffering, and subjugation of women, she is on a mission to end the oppressive reign of the god-king Odin.

The script is being written by Kerry Williamson and will be produced by Rober Kulzer and Adrian Askarieh.

“The entire Heathen team and I are incredibly excited about adapting my little lesbian Viking comic for film,” said Heathen creator, Natasha Alterici. “I’ve been a film fanatic for longer than I’ve been a comics fans, and that my working in one format would lead to another is nothing less than a dream come true.”

“Natasha has created an instant classic which smartly ties into the current socio-political zeitgeist while being a first-rate timeless adventure story,” said Adrian Askarieh. “Not only is it a great passion of ours to bring Heathen to the big screen, but also a true honor.”

“Heathen is truly one of those “lightning in a bottle” ideas and it’s easy to see why Vault is already on their second printing of the trade paperback. Natasha’s ability to take classic themes and characters and present them in a fresh new way speaks volumes about her talent as a creator,” said F.J. DeSanto.

No word on a release date yet, but if you are sitting around thinking, “Gee, I sure wish I could write for Marvel or DC so my comic book could be turned into a movie,” then here is good news for any indie comic creator.