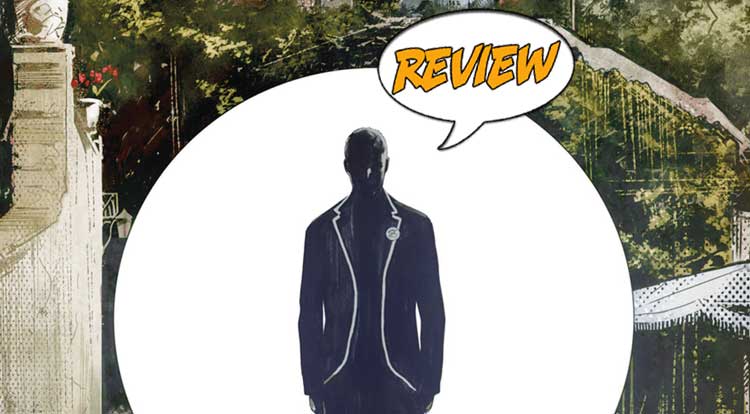 Your are in the village.  They want…  information.  And by hook or by crook, they will get it…  Your Major Spoilers review of The Prisoner #1 awaits! Previously in The Prisoner: “In the 21st Century, the global currency is no longer oil or gold but information.  And he who possesses it, possesses the world.  There is one place on the planet where the most valuable information is mined, a place that prides itself on ‘mental fracking’, promising to extract any secret from any individual using any means possible.  It is perhaps the intelligence community’s darkest secret, aligned to no one political system or state, an autonomous institute, free of state manipulation.  The identity of its controller, the mysterious Number One, is unknown.  It is a place so secret, some believe it to be a myth.

It is The Village.”

We open with a literal smash, as MI5 Agent Breen leaps out his apartment window, officially on the run from his own agency and government.  Making a run for it, he changes his identity more than once on the way to a safe house, all the while wondering about whether “The Village” is aware of his status.  The answer becomes a clear yes when gas begins flooding the room, triggering a hallucination/flashback (which includes gratuitous cameos of Number Six and the last Number Two in the midst of a visual reference to the original television show) and showing us how he got here.  After a mission turned sour, his partner/lover was lost in the Middle East, with the knowledge she possesses a threat to crown and country.  Refusing the order to find and assassinate her, he instead stole the most arcane of secrets, intending to use it to barter for her freedom.  When the gas clears and he awakens, it is in The Village…

“THE VILLAGE HAS NO AFFILIATION.”

It’s always difficult to balance the new and the classic when it comes to a revival series, but this book manages to pull it off effectively.  Aside from the visual cameos, there is reference to “only one man” ever having escaped The Village, which raises the question of whether they’re keeping the events of the show set in 1968 or if we might see some of the show’s characters return.  Either way, this is an effective first issue that integrates the flashback sequence quite well, and Lorimer’s art is interesting and complex.  There are some occasional issues with stiffness in posing, but they’re mostly overcome by the strength of his expressions and the storytelling.  The double-page spread showing Breen/Number Six’s first view of The Village is pretty breath-taking, and the cliffhanger promises that there’s more where that came from.  Here’s hoping that they can keep the balance of mystery and reveal as well (or as badly, depending on how you feel about ‘Fall Out’) as the source material…

The first three questions of an adaptation are: Do the likenesses work?  Does the story fit with what we’ve seen?  Is the story being told worth going back to the well?  This issue’s answers are “Yes, although they’re only seen briefly”, “Yes” and “It has potential”, leaving The Prisoner #1 with a long-awaited 4 out of 5 stars overall.  This issue works as an introduction, as a first issue and as a revival, but the biggest questions still remain unanswered, making me want to come back next time.

I’d like to go on the record as hoping that we see the original Number Six in these pages, but have no idea how to best pull that off…

An interesting modernization of the original concepts, firmly planted in the 21st Century, which references and calls back to the show...