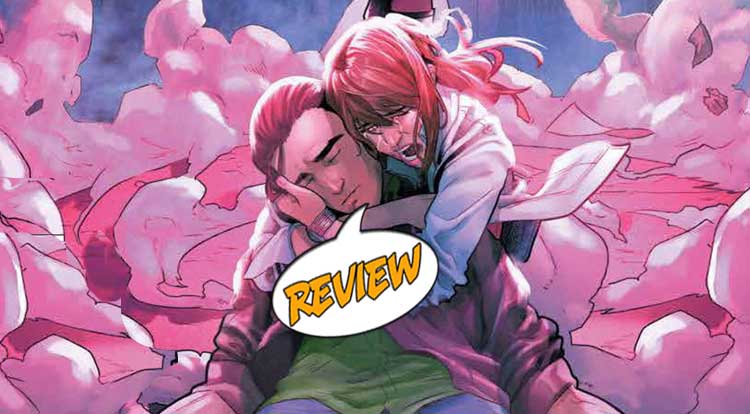 A friend has fallen.  But will this be the last casualty among the forces of the Power Rangers?  Not if Lord Drakkon has anything to say about it…  Your Major Spoilers review of Mighty Morphin’ Power Rangers #26 awaits! Previously in Mighty Morphin’ Power Rangers: “After the shocking events of the last issue, Lord Drakkon’s victory seems assured — unless the Rangers can find a way to team up with another team of Power Rangers they’ve never met before!”

REINFORCEMENTS FROM THE FUTURE

We open with Lord Drakkon returning to his alternate hellscape of a world, greeting his minion Finster-5 with an unnervingly friendly hug.  Drakkon’s adventures in the past have convinced him that the time has come for his big plan: Traveling throughout the multiverse to defeat all the Power Rangers that that are, were or will be.  That’s heavy.  Things are equally tense in the Power Chamber as Zordon infuses Tommy Oliver’s form with strange blue energies in an attempt to revive him, only to reveal that Tommy is beyond helping.  The Rangers realize that they have to return him to his family and go through the process of grieving their lost friend, even as they hope beyond hope that it’s not true.  A funeral is held, after which their strange visitor awakens, explaining that she is Jen Scotts, Pink Ranger and leader of Power Rangers Time Force, and that she traveled to their present because time itself is broken.  In the hope of stopping Drakkon, The six Rangers follow his signature to Shiba House, the home of the Power Rangers Samurai, only to find that they’ve arrived too late…

ANOTHER QUADRANT HEARD FROM

As a Power Rangers nerd from the beginning, this issue is an exciting one for me, tying in as it does the Time Force and Samurai teams (and, in so doing, promising to clean up the somewhat messy nature of Power Rangers chronology.)  The emotion around the loss of The Green Ranger feels entire authentic and meaningful, and best of all, Jen’s explanation and infodump not only informs the Rangers of the legacy that they have, she lays it all out for any readers who aren’t familiar.  There’s a backup story in this issue as well, featuring Blue Senturion trying to track down a group of theives wearing the costumes of the original Mighty Morphin’ Rangers.  It’s a clever tale, full of fun references to police procedurals and movies, but it’s humor is a little bit muted by the seriousness of the first story.  Both parts of the issue have excellent art, though, and the sight of Drakkon’s armies marching on Shiba House is flat-out impressive.  As the issue ends, the Rangers have another refugee Power Ranger added to their ranks, making me hope that we’ll get ALL the teams in one form or another.

This issue combines two things I love: The generational linkages of the Power Rangers teams and massive crossover anniversary madness, and since this is comics, we don’t even have to worry about availability of actors or whether or not they can make it to New Zealand.  Mighty Morphin’ Power Rangers #26 sets the stage for something even bigger, shows us the first glimpse of Drakkon’s real plan and makes for an exciting read top to bottom, earning 4 out of 5 stars overall.  If multi-Doctor Doctor Who stories are your jam, consider this the Power Rangers equivalent, and know that it’s a very well-done book…

The main story is tense and exciting, the backup is amusing, and while they don't quite gel together, the total package makes for a good read.