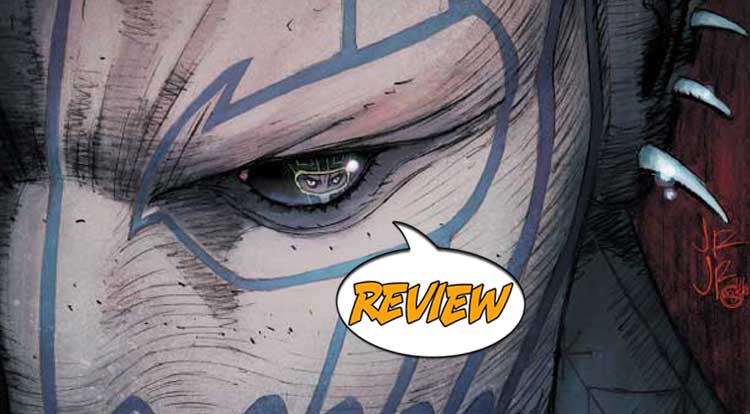 A hero is only as good as her villain.  That’s where Violencia comes in…  Your Major Spoilers review of Kick-Ass #3 awaits! Previously in Kick-Ass: “KICK-ASS IS BACK.  Patience Lee’s shaking up the city’s organized crime rings to feed her family and give stolen money back to the community.  But the enemies she’s making have friends in low places, friends that will avenge their bosses come hell or high water.  The city’s most violent offender is fresh out of jail, and he’s got Kick-Ass in his sights…”

The first four pages of this issue are the story of Violencia, the one-eyed, facial-tattooed spree killer seen on the cover, and his pursuit (and gruesome, on-panel murder) of a man who once slighted his employer in a bar in La Mesa.  It’s a story designed to show us how awful the character is, ending with his imprisonment and the explanation that he’s broken out again.  His boss, Maurice (who is also Patience/Kick-Ass’ brother-in-law) wants to give him a present: The police officer who arrested him.  Meanwhile, Patience has a run-in with obnoxious kids in a parking lot, followed by trying to find ways to disperse the money she stole from the Russians to deserving causes.  When she sets out to raid another money-laundering outfit, she inadvertently ends up in the middle of Violencia’s “gift.”

That’s when it gets bad…

I remember really enjoying the original Kick-Ass book when it came out, with its premise of realism, but it never really stuck too hard to that, embracing ninja teens and unrealistic levels of violence with aplomb.  This series, however, has a main character who is actually skilled in matters combat-related, which raises the stakes in all the wrong ways.  Patience lives in a movie-style depressed area full of terrible people doing everything they can to survive, which pushes the story into a realm of parody that undermines the premise and the realism.  Romita’s art style has changed since that first series as well, with softer edges than he had circa the first Kick-Ass series, and the subtle coloring pleasantly accents that evolution, especially the brief fighting moments this issue provides us.

BOTTOM LINE: VERY MUCH IN THE ‘KICK-ASS’ SPIRIT

It’s hard to reconcile this book with liking the original Kick-Ass, because I’m very conflicted about it.  Somehow, having Patience (who is a much more likable character with a logical reason for what she does and the training to make it work) as the central figure defuses the idea that made Kick-Ass work: The idea that superheroes and reality really can’t mix effectively.  Kick-Ass #3 is still troubling, but the strengths of the art help to overcome that, leaving this issue with a right-down-the-middle 2.5 out of 5 stars overall.  There’s a superficiality to this story and its ultra-violence that just doesn’t quite get the job done…