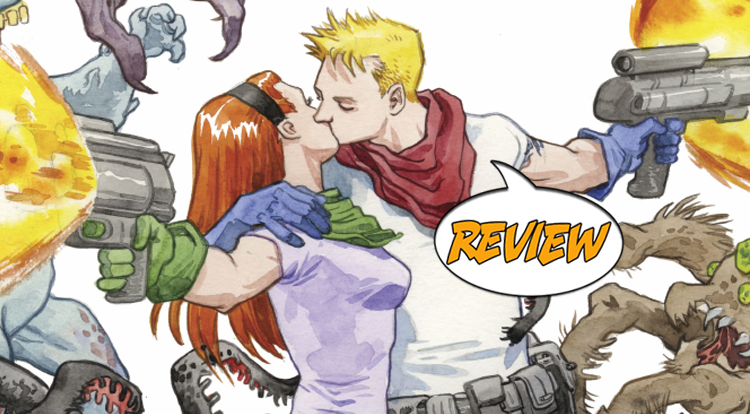 Thanks to George Romero, most zombie-style stories end up in a mall at some point or another…  Your Major Spoilers review of Scooby Apocalypse #24 awaits! Previously in Scooby Apocalypse: “It’s the moment we’ve all been waiting for: Fred and Daphne are finally together!  But in a world full of murder, monsters and misery – how long can true love last?”

LOVE IN THE APOCALYPSE

Having gone to ground in a mall, the Mystery Inc. gang has found one of the strangest scenes they’ve encountered in their strange monstery world: Two warring armies, each headquartered in a different department store, fighting each other and ignoring the tender humans in their midst.  While Daphne and Velma battle endlessly over their next move, both Shaggy and Fred are busy mooning over their love interests.  Shaggy is totally into Daisy, the former wife of Velma’s late brother, while Freddy has it bad for Daphne.  So bad, in fact, that he has proposed to her a dozen times and been rebuffed every time.  It’s actually pretty sad, to be honest.  But, when he and Daphne venture out to examine the monsters’ lairs, they take the time to address her overtly abusing behavior, even talking about her abusive dad, leading him to make one last proposal…

…right before they find the biggest army of mutants they’ve ever encountered.

With the ominous solicitations for issue #25, this issue’s cliffhanger is a little bit extra cruel, but overall the issue works for me.  Most of the complaints that I had or heard about the premise of this book have been worked out, leaving us with some solid post-apocalyptic drama in these pages, with Giffen & DeMatteis using the characters to examine, confront and even provoke each other to some important moments in these pages.  Oliff’s art is also well-done, with one exterior shot of the Mystery Machine overwhelmed by weirdo mutants catching my eye as especially interesting.  The creators are even skilled at taking the meta-textual moment of the mall sequence and using it to good effect rather than as a wink-and-nod or just fodder for Shaggy’s pop-culture humor…

Though I missed a few issues of this title, I was able to pick up the story without any problem, and the story being told still holds my interest.  Even though I’m almost certain I know what’s coming, Scooby Apocalypse #24 ratchets up the tension and emotion while presenting a mystery for Scooby and the gang that may change the game, earning 3 out of 5 stars overall.  I just hope that, whatever happens, we get a Frank Welker-voiced version of it somehow…

A 'Dawn Of The Dead' riff with some interesting character work and a cruel final-pages reveal...