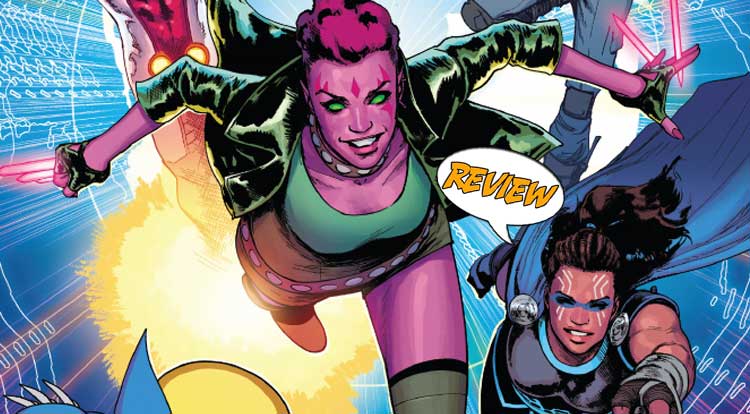 Blink is back, with a new team to defend the timestream and the universe.  But the real question is: Who is her new overseer?  Your Major Spoilers review of Exiles #1 awaits! Writer: Saladin Ahmed
Penciler: Javier Rodriguez
Inker: Alvaro Lopez
Colorist: Jordie Bellaire
Letterer: VC’s Joe Caramagna
Editor: Wil Moss
Publisher: Marvel Comics
Cover Price: April 11th, 2018
Release Date:
Previously in Exiles: “Fan-favorite X-Man Blink once joined a team destined to save not just the world, but the entire Multiverse.  And now, her teleporting talents are needed once again!  When a mysterious threat begins eating away at the fabric of the Multiverse, the Unseen – the man once known as Nick Fury who now can only observe Earth from a lofty post on the moon – must recruit a champion to save it.  But she can’t do it alone.  Who will join Blink’s new team – and can they ever go home again?”

HE USED TO BE NICK FURY

So, back in 2014, Uatu The Watcher was murdered by The Orb, and one of his eyes stolen.  The other eye (which, since he is an immortal Watcher, was pretty much the source of his Watcheriness) was taken by Nick Fury, who has since that time been stuck on the moon in the guise of The Unseen, no longer human but still aware of the man he was.  When another Nick arrives, bearing The Tallus, the time-travel device that sent the original Exiles in their travels across the universe years ago, things start to get complicated.  At her home in Barbados (or at least at the home of her deceased multiversal counterpart), Clarice “Blink” Ferguson recognizes the power signature of The Tallus, teleporting to it and finding The Unseen.  The once-and-former Nick tells her of things going on in the greater multiverse, terrible creatures that are destroying time, space and dimension, and tells her that she is chosen by the device to act as protector of the very fabric of the Multiverse.

And then, she’s torn from her new home once again and thrown through space and time…

CHARMING ON A NUMBER OF LEVELS

This issue actually covers a lot of territory and a lot of information, but does so quickly and carefully, without feeling super-rushed.  The re-introduction of The Unseen (whom I can’t remember seeing since ‘Original Sin’ ended, but to be fair, that’s three universal crises ago), the revelations about Blink’s new adoptive family, and the introduction of two members of her team (a future Ms. Marvel who now goes by ‘Khan’ and Iron Lad, once of the Young Avengers) all goes by briskly without ever getting muddled up in too much detail.  The art by Rodriguez and Lopez has a lot of really fun energy and expressions, and while there are moments (particularly with Iron Lad’s future reality) where things feel a little indistinct, nothing ever feels like it’s failing.  In fact, there are aspects of the art that reminds of Richard Corben’s work on ‘Heavy Metal’ years ago, with round lines and faces that are starting to grow on me.  Best of all, Blink, Khan and Iron Lad all have a lot of character infused into their dialogue and interactions, and the final page reveal of the Time-Eater is both perfectly logical and a big surprise…

BOTTOM LINE: I’M IN, BUT I MISS THE MIMIC

Though we don’t have the full team assembled (the cover promises a ‘Thor: Ragnarok’-inspired Valkyrie and Mini-Marvels Wolverine, but I’m hoping for the traditional turnover of team members that Winick’s original series did so well and tragically.  Exiles #1 is a long-overdue reboot with a really strong premise and dialogue and above average art, with a really exciting cast, earning 4.5 out of 5 stars overall.  If nothing else, it’s nice to see Kamala Khan has become so interwoven into the Marvel mythos that she is a future post-apocalyptic survivor…

A very solid premise, great dialogue and scripting and art that has a lot of potential. Sold!