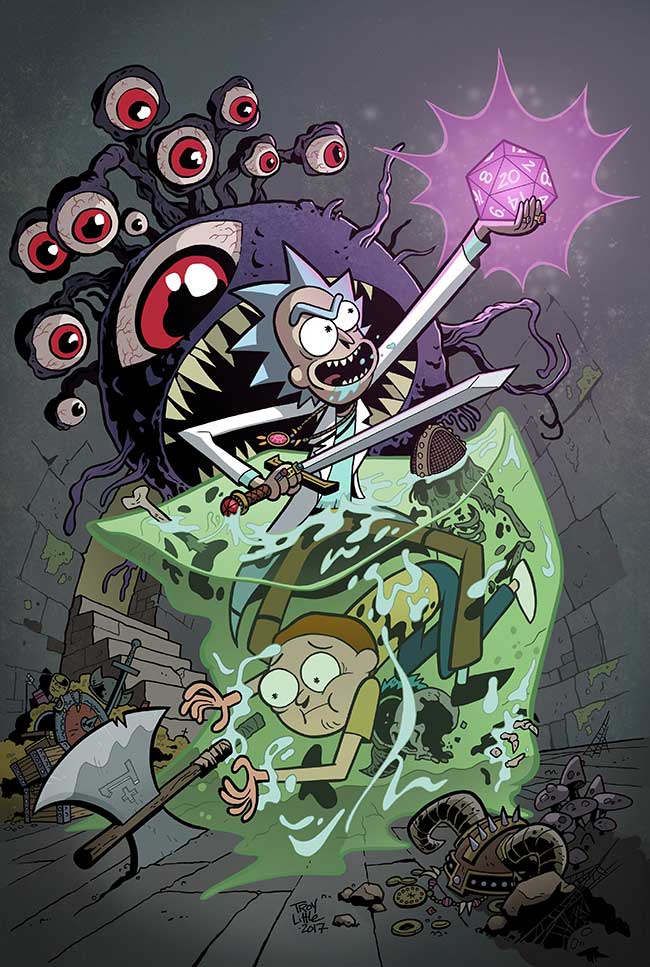 Oni Press and IDW Publishing are teaming up for one of the craziest crossover events we’ve seen in a while as Rick and Morty meet Dungeons and Dragons. And who better to make the story happen than Patrick Rothfuss, Jim Zub, and Tory Little. “I love Rick and Morty™ with a powerful love, and I’ve played D&D since the 5th grade,” said Patrick Rothfuss. “So when they approached me about writing a story with both of them together? That’s some serious you-got-chocolate-in-my-peanut butter $#!& right there. I’m in. I’m all the way in. I’m gettin’ that chocolate all up in the peanut butter. Like, deep in. All the way in. It’s going to be sticky and delicious.”

In this summer’s biggest comic book crossover, Morty goes to Rick for help to learn about Dungeons & Dragons, the game all the cool kids at his school are playing; naturally, things go horribly wrong as Rick, Morty, and the whole Smith family find themselves on an epic quest with no escape in sight.

“The Dungeons & Dragons crew is letting Pat and I open a Pandora’s Box of insane adventure material and iconic creatures from the granddaddy of all tabletop role-playing games,” said Jim Zub. “I wish I could say we’ll take good care of it, but, the simple truth is, this is Rick and Morty™ we’re talking about. No fantasy world or otherworldly plane of existence is safe.”

I think someone has been listening to Critical Hit and figured out that this kind of a crossover is going to get super crazy, super fast.

The four-issue mini-series kicks off in August.