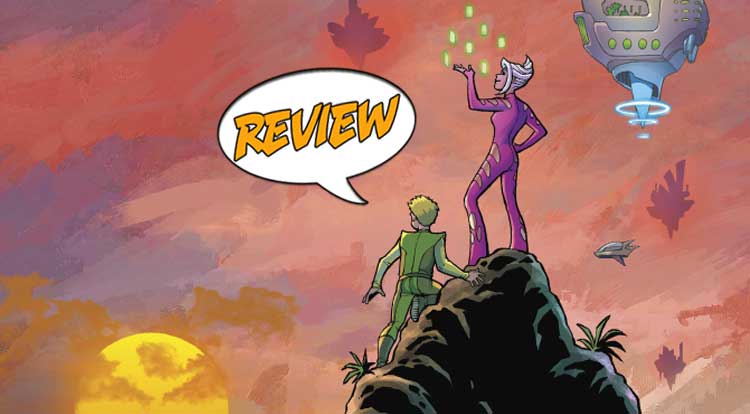 It’s the end of the line for George Jetson, his boy Elroy, daughter Judy and Jane, his wife.  But is there a future for their future?  Your Major Spoilers review of The Jetsons #6 awaits! Previously in The Jetsons: “It’s the end of the world!  Or is it something more that no one could foresee?  George Jetson makes the ultimate sacrifice for his family and for the planet Earth.  Jane and the kids see something they never expected to see happening before their eyes!”

The opening sequence features the wedding of George and Jane Jetson, a strange tableau that gets even stranger and George turns to dust and breaks apart in her arms.  It’s a really disturbing sequence, one that should be an echo of endless nightmares, but the art never quite makes the characters seem real.  As Jane awakens from her nightmare, we see that she, Elroy, Judy and the whole world believe that George is dead and are waiting for the asteroid that he didn’t stop to destroy the planet.  When it stops in Earth orbit, Jane uses her pull with the space agency to take a ship into orbit.  On the asteroid, George and Rosie (the spirit of his deceased mother) encounter the alien in command of the “asteroid”, and discuss matters of evolution and humanity, just in time for George’s entire family to arrive on a ship.  The alien (whose name is long, but wishes to be called ‘O’) tells them that humanity is about to reach the fourth plateau, and that he and his people wish to assist/oversee them…

I’ll be honest: The storyline about evolving and changing wasn’t ever really clear enough for me to parse out what the intention was, but the story clearly wants to make philosophical statements about becoming more advanced, better people.  It’s a philosophy I wholeheartedly agree with, but Palmiotti’s script can’t quite bring it together.  The interactions between the family members are well-handled, especially Jane and George’s reunion, and I like a lot of the dialogue between Elroy and his girlfriend.  Even more sadly, this artist combines some stiffness in figure work with very sketchy facial expressions, which doesn’t help to convey the moods of the characters or their responses to the situation.  The end of the issue promises that it is the end of the beginning, but I’m not sure that this take on the Jetsons is one that I’m interested in seeing more of…

After reading the H-B/DC books, I’m a wholehearted believer in these mashups, but The Jetsons #6 lacks the satirical punch of ‘The Flintstones’, the all-out action of ‘Future Quest’ or the complete lack of restraint that makes ‘Scooby Apocalypse’ work, and both the script and the art could have used a little more polish and focus, earning 2.5 out of 5 stars overall.  It’s not the worst of the Hanna-Barbera books, but it never quite seems to effectively convey the story points and themes that are clearly meant to be here, making for a disappointing end to a book that seemed to want to be a celebration of life and humanity…

There's a lot going on here, but it doesn't quite gel, and the art just feels... off?