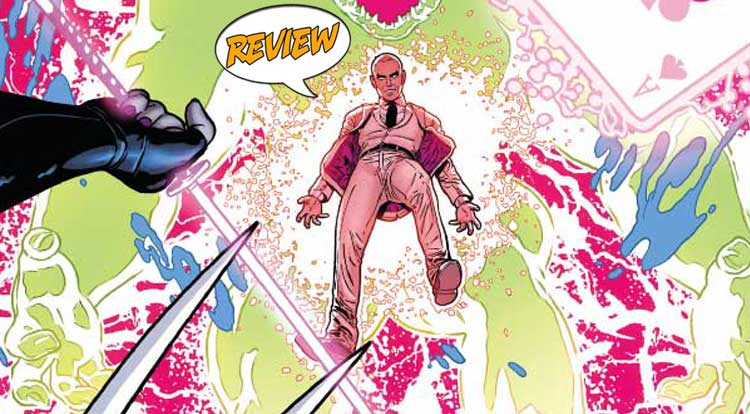 Proteus is back!  And he’s not the only one…   Your Major Spoilers review of Astonishing X-Men #10 awaits! Previously in Astonishing X-Men: “Evil doesn’t always know it’s evil.  Proteus has a wonderful gift for the world – all he needs is a little time for the finishing touches.  The X-Men race north to stop him, and choose their field commander for the battle to come.  It’s the mutants unleashed at last, fighting Proteus’ army for the fate of the planet.  Evil doesn’t always know it’s evil…

“I REFUSE TO SUBMIT TO THE TYRANNY OF REALITY…”

We open with our X-Men team (Rogue, Psylocke, Bishop, Gambit, Mystique, Archangel, Old Man Logan and another member we’ll get to in a moment) in hot Blackbird pursuit of Proteus, the reality-warping menace from years ago.  Proteus has spent years trapped in a psionic hellscape of the Astral Plane, where The Shadow King reigned surpreme, only to escape last issue.  Part of the reason that he could was the escape of Charles Xavier (who now chooses to go by X, since he is now in a younger body after escaping), and now X leads the X-Men…

…directly into an ambush by dragons?  Well, they’re not actually dragons, but nothing is actual, as Proteus has warped an entire village with his powers, leading to a mind-to-mind battle that leaves X on the receiving end of a psychic beatdown.

This is a beautiful issue, folks.  ACO’s layouts are brilliant, featuring mostly double-page spreads and some of the most creative layouts since J.H. Williams on ‘Batwoman’ a few years ago.  The panel breakdowns are wild, featuring wild cut-in panels, extreme close-ups and a complete cessation of reality, perfectly fitting the hallucinative nature of Proteus’ powers and bringing home the kind of power this young mutant has.  I’m actually really impressed with the amount of work put into the return of X from the great beyond (especially given that he was murdered by Phoenix and dismembered in a Remender comic, with his brain dissected by The Red Skull) and the use of young Xavier, old Wolverine and a very 90s roster of mutants makes for a great character balance.  The final pages of this comic set up a massive conflict for next time around, marred only by next issue’s Greg Land cover…

This is a good issue, well-plotted and exciting, with my only real complaint being that it still feels a little bit like a middle chapter.  Then again, it is a middle chapter, and a good one, leaving Astonishing X-Men #10 with a very impressive 4.5 out of 5 stars overall.  If nothing else, this is one of the rare comics that delivers on the premise of “anything can happen when it’s all in your head”, even topping the original appearance of Proteus by Claremont and Byrne three decades ago…

Soule's script is solid, but the real star is ACO's creative layouts and psychic battlescapes.