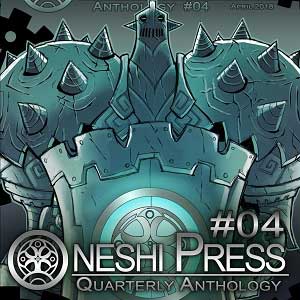 Oneshi Press to launch forth anthology in July

Independent publisher Oneshi Press announces the release of its darkest collection of indie comics yet—Oneshi Press Anthology #04! This fourth installment in the quarterly comics collection peers into the shadowy corners of the human experience, from dark magic to space trash to organized crime, and much more. “Our fourth anthology is the most beautiful and thought-provoking yet!” says Lynsey G., Oneshi Press’s editor and co-founder. “We’re excited to present a diverse group of creators whose work goes so deep. It’s not always light, but sometimes we can see more clearly in the dark.”

This 60-page collection of short comics, including excerpts from longer works, features gorgeous cover art by Tom Barton. The comics begin with an introduction from the Oracle, an otherworldly creation of fine artist Xavier Hart. Then, take a hard look the bloody deeds Tracy Queen must commit to leave her dark past for a future of hope and pleasure, in the fourth installment of the graphic novel by Lynsey G. and Jayel Draco. Next, plumb the depths of depravity that human and goblin alike will sink to when magic is at stake in “The Bottle” by A.M. Paulson and Jason R. Johnson. Watch as humans in space let fly their filth without thinking of the consequences in “Dispose” by Ryan Haack and Diego Vidal. Ponder the choices of a man-made experiment, and those who created him, in “Heartbreaker” by Erica Schultz and Jan Velazquez. Share memories of “That Time I Turned 30 in Greece” through the eyes of Tana Ford, who lived them. And shiver at the fourth installment of PACK, by Lynsey G. and Jayel Draco, where we learn the bloody, disturbing history of a pit bull named Kindness. Enjoy by guest art from X Cat, and artist spotlights on Lillian Nelson and Tom Barton along the way. With lettering from Cardinal Rae, Jason R. Johnson, Ryan Haack, and Tana Ford, and flat colors by Flattsquat, Oneshi Press #04 will chill and thrill you in equal measures!