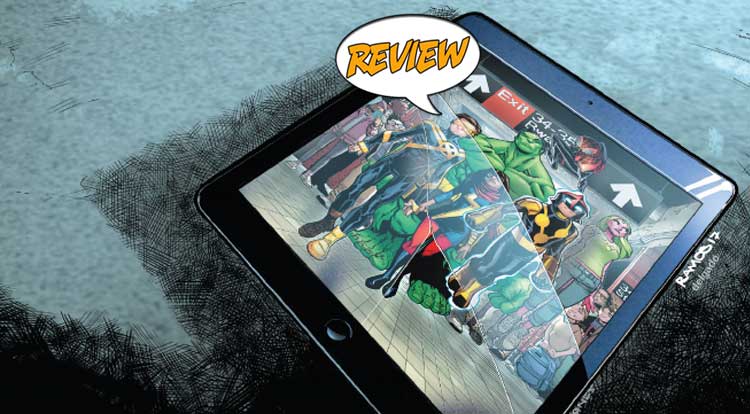 Viv and her 2.0 version sister ended last issue with a shock.  What will the Champions do when they find out the truth?  Your Major Spoilers review of Champions #18 awaits! Previously in Champions: “The new order changeth!  After a series of tragic setbacks and shakeups, the Champions are faced with a grim decision – is it finally time to disband and give up the fight?”

Having been turned fully human during the clash with the High Evolutionary, Viv Vision though things were getting better.  Of course, when her father created a new synthezoid “sister”, it complicated matters, but when that sister went mad and tried to kill her, forcing Viv to respond with violence?  Thaaaat sucked.  Faced with her friends’ blank stares, Viv takes off running, forcing the assembled Champions (which now include the new Patriot, the young Falcon, Red Locust, Ironheart and The Wasp) to fan out and find her.  Ms. Marvel and Cyclops have a moment which makes her tell him how glad she is that he’s around because foreshadowing is a hallmark of quality literature, while the Vision himself figures out where his daughter has gone to ground, because he just knows his daughter that well.  (*Awwww!*)  Things get complicated after that, with Viv making a hard decision, Cyclops explaining a tough decision of his own and the team coming together to remind Ms. Marvel that she’s not the reason why everything went off the rails there for a while.  The final page gives us the last Waid/Ramos Champions moment, with the team setting off to really, truly “Change the world”.

For a few moments during this issue, I was worried that this was a final issue, which made me very sad (especially since so many of these heroes are losing their solo books or team slots.)  This issue serves as a capstone for the first era of Champions, and even with the focus on Viv’s story and Cyclops’ exit (“Bye!  I’ve got an Extinction Agenda to fight in!”) there’s still a little room for Miles, Amadeus and Nova to get a couple of nice moments in as well.  Still, eleven heroes is too many for this issue, which makes things feel a bit crowded in and around the nice moments.  As a well-documented Ramos naysayer, I liked the art in this issue (especially the splash page of Viv realizing what she’s done and Cyclops’ and Ms. Marvel’s goodbye) and I sincerely hope that the promised “secret new member” next ish is Red Locust, even if her creator is leaving the book.  Most of all, I’m happy to see from the “Next Issue” blurb that Wasp and Ironheart will be an ongoing part of Jim Zub’s new Champions’ status quo…

BOTTOM LINE: A NICE CAPSTONE TO END THIS ERA

Though some have found Waid’s take on young heroes to be embarrassing, I’ve never had the “Hello, Fellow Kids!” problem, and I’ve enjoyed seeing these young heroes trying to follow their hearts, and this issue feels like a nice ending for what I hope is the beginning of a long, LONG run for the teenage heroes.  Champions #18 is a very personal book that feels like it’s putting things back in the box for the next creator, with the promise of interesting new stuff on the horizon and some fun art from an artist I don’t always love, earning 3.5 out of 5 stars overall.

The end of an era, but thankfully not the end of The Champions...