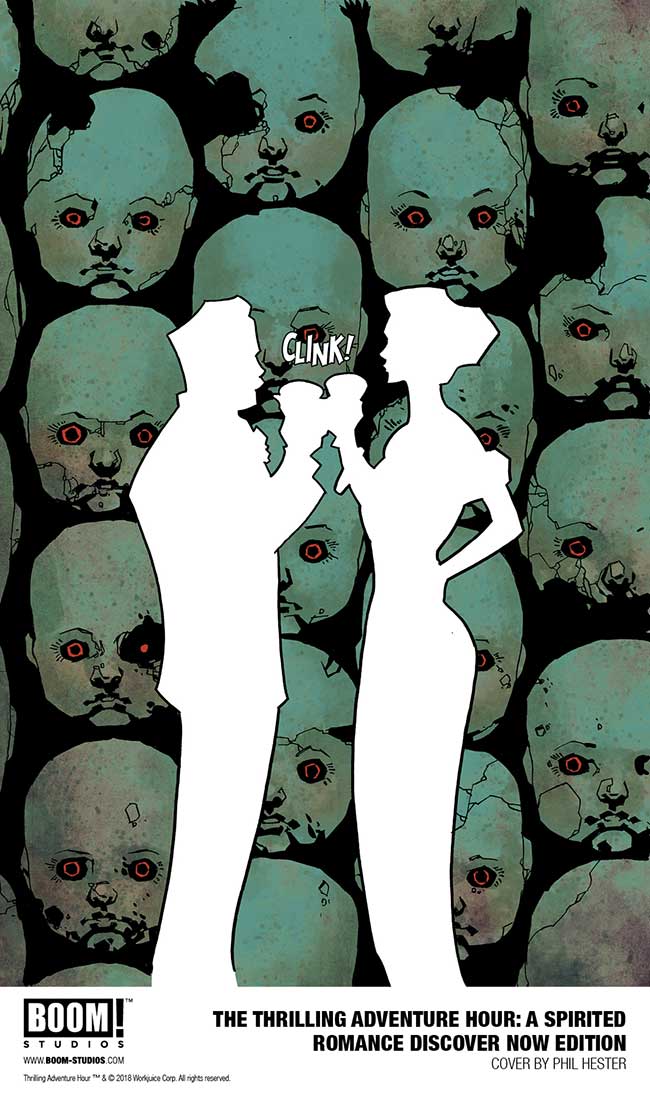 In February, BOOM! Studios announced it had acquired The Thrilling Adventure Hour comic book series by Ben Acker and Ben Blacker. The publisher has just announced the first issue of the series will arrive in July 2018.

Creator Acker and Blacker return (continue?) the adventures of Frank and Sadie Doyle and their continued interactions with the supernatural. If you aren’t familiar with the characters, they are a very close parody of Nick and Nora Charles, characters created by Dashiell Hammett in his The Thin Man series from 1934. Of course, being Acker and Blacker, Frank and Sadie drink a lot more and deal with every manner of ghost and goblin in often hilarious situations.

In this new monthly series, based on the wildly popular Hollywood stage show and podcast, Frank and Sadie Doyle are the toast of the upper crust – headliners on the society pages…and they see ghosts. When one night of having a drink (or ten) with friends goes horribly, and perhaps predictably, wrong at a haunted house, the Doyles find themselves in a situation beyond belief.

“We’re utterly thrilled to call BOOM! Studios the new home for Thrilling Adventure Hour comics,” said writers Ben Acker and Ben Blacker. “In addition to collecting our previous, heretofore uncollected, TAH comics work, we’re excited to bring new stories featuring married mediums Frank and Sadie Doyle, Sparks Nevada, Marshal on Mars, and more. We’re looking at the first arc of this new Thrilling Adventure Hour series as an opportunity to re-introduce these characters and bring forth the fun, the humor, and the grounded storytelling that we love about the show and the podcast. We think new readers, as well as existing Adventurekateers, will fall in love with these characters (all over again).”

The Thrilling Adventure Hour #1 written by Acker and Blacker, with art by M.J. Erickson, arrives in July 2018.