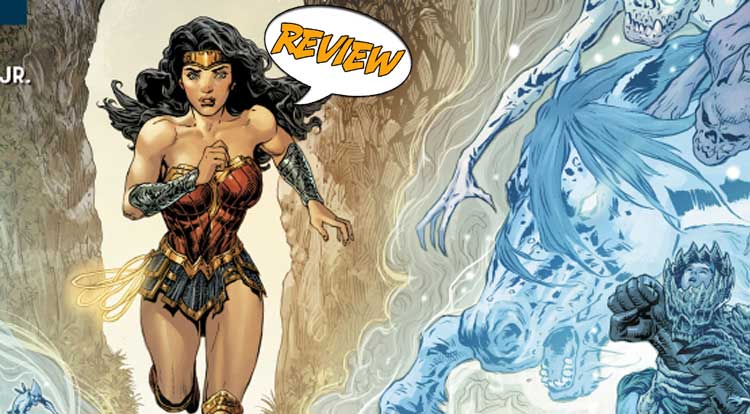 The Brave and The Bold: Batman and Wonder Woman #2 (of 6) Review

The Amazing Amazon and the Dark Knight Detective are forced to operate in a world of Celtic mythology.  One of them finds it easier than another, for reasons that should probably be obvious…  Your Major Spoilers review of The Brave and The Bold: Batman and Wonder Woman #2 awaits! THE BRAVE AND THE BOLD:  BATMAN AND WONDER WOMAN #2

Previously in The Brave And The Bold: “Batman finds himself drawn further into a world of Celtic myth and supernatural mysteries as Wonder Woman calls on the Dark Knight Detective to investigate the murder of a once-powerful Irish god.  In a world where the normal rules of investigation don’t apply and any clue can be obscured by charms and magic, the two Justice Leaguers must rely on each other to unlock a murder someone is trying to hide.”

“WHAT I SAW, WHAT I EXPERIENCED…  MAGIC!”

We open in the land of Tír na nÓg, where Wonder Woman has been pulled, thanks to the murder of one of the legendary Fomor.  She quickly uses her lasso (which, lovely callback, she calls “The Golden Perfect”) to ascertain who the murderer is.  At the same time, in Gotham City, Batman discovers that the Irish section of town is under a spell, trapped in a strange slumbering state from which he barely escapes, thanks only to Alfred’s calm voice in his communicator.  I especially love the fact that this issue doesn’t shy away from the question Batman and magic, as the Dark Knight explains to his majordomo that he’s seen things he can’t ever explain, even been a focus for the powers of New Genesis and stood side-by-side with magical beings.  It’s a nice moment for Batman, as he parses out the idea of magic as something akin to (but different from) the science he is a master of.  It’s pretty perfect stuff, made even more intriguing when Wonder Woman arrives through a magical portal, asking for her fellow JLAer’s help…

The real star of this issue is Liam Sharp’s art, using complex themes and motifs, putting great detail into the armor of the Fomor, the world of Tír na nÓg and even Wonder Woman’s costume.  Sharp’s Batman is lovely as well, but drawn with sharper edges and what feels like a thicker line, as if to emphasize his Earthly nature in a story featuring magic and swirling backgrounds and such.  This issue’s story feels like it’s stalled a bit, but I enjoy the dialogue and conversations that we do get, not only Batman’s theories on magic but Wonder Woman’s explanation that she knows “a knight” who will help to unsnarl the murder mystery in the realms beyond, making for interesting reading even if the plot doesn’t really advance much.  It’s hard to play both these characters true to their roots, one being a mundane man with gadgets and the other being a living creature of clay and magic, but when it’s done well, as in these pages?  It makes for (you should excuse the expression) magic.

BOTTOM LINE: GREAT USE OF BOTH HEROES

For a story I kind of worried I wouldn’t like, I have to say I was surprised at how well The Brave and The Bold: Batman and Wonder Woman #2 holds together, featuring truly inspired art and some great character moments and dialogue, earning 4 out of 5 stars overall.  Even the issues with the pacing aren’t fatal to this story’s momentum, and will likely not even register when you read all six issues collected.  I’m looking forward to more Batman in Misty Magic Land…

THE BRAVE AND THE BOLD: BATMAN AND WONDER WOMAN #2

This issue features Wonder Woman and Batman in different habitats that cross over, with both heroes used to great effect and a lot of super-attractive art...