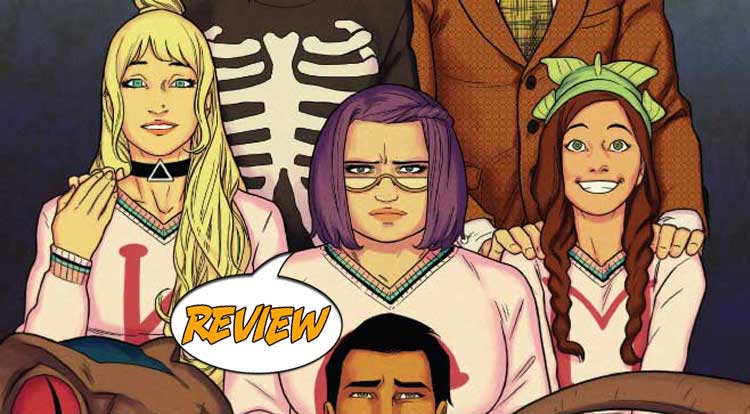 Everyone has been resurrected, reconnected and/or saved from their crazy grandparents, meaning the Runaways are once and finally reunited at last.  Now what?  Your Major Spoilers review of Runaways #7 awaits! Previously in Runaways: The Runaways are a family again!  But a family needs a guardian, and the only Runaway who’s got her life together is in middle school…

Which, even for a kid like Molly who likes school, can be fraught with peril.”

This new volume of Runaways got off to a rocky start for me, but with this issue, things have started to settle into a new status quo:  Chase Stein has resurrected his ex-girlfriend, Gert Yorkes, reassembled the Runaways in the Hostel, and even reactivated Victor Mancha’s severed cybernetic head.  He’s “the man of the house”, the oldest, and intends to find himself a solid, grown-up day job to pay the bills for his family.  With Molly Hayes still in middle school, he also has to (with the help of Nico’s magic) take over as legal guardian, seeing as Molly’s grandmother turned out to be as dangerous as her parents were.  There’s a lot of cute moments in this issue, from Victor and Gert bonding as she gives him to a haircut, to Nico and Karolina reconnecting as friends to Molly’s adorable BFF dance with her new pal, Abigail.  And of course, that last page implies that something just isn’t right in the Runaways world, yet again…

I really enjoy Anka’s art, managing to make Chase look as uncomfortable in a suit and tie as he should, keeping everyone looking the appropriate age and making a scene featuring a conversation and a haircut visually interesting (and that’s an impressive achievement.)  With Karolina’s GF Julie (That’s Julie Power, Lightspeed, for those keeping score) coming next issue to visit and the beginnings of what could become strained relationships starting to show on multiple fronts, this book has turned into something different than I expected, as well as unlike previous volumes of the book.  We’re also seeing some new dimensions to Nico, to Chase and especially to Gert, who has to come to terms with being yanked out of the past into a strange new world where her friends have changed and aged and she…  hasn’t.  In short, if you’ve read Runaways before, it’s something new and if you haven’t, you can easily jump in here.

In this volatile comic market, I’m worried that having the first six issues be as wobbly as they were could have a negative effect, I enjoy this issue and the new take on the Runaways team.  (It has been fifteen years since their debut issue, after all.)  Runaways #7 is one of those charming stories where no monster attacks, no villain blasts their way in, but there’s still drama and story to be had on every page, all featuring excellent rendering, earning a better-than-average 3 out of 5 stars overall.  I have to say, I enjoyed this issue much more than the entire season on Hulu, if that’s worth anything to you as a recommendation…

The Runaways have carved out a new life, but now they have to work to keep it... And what's up with Molly's school situation?