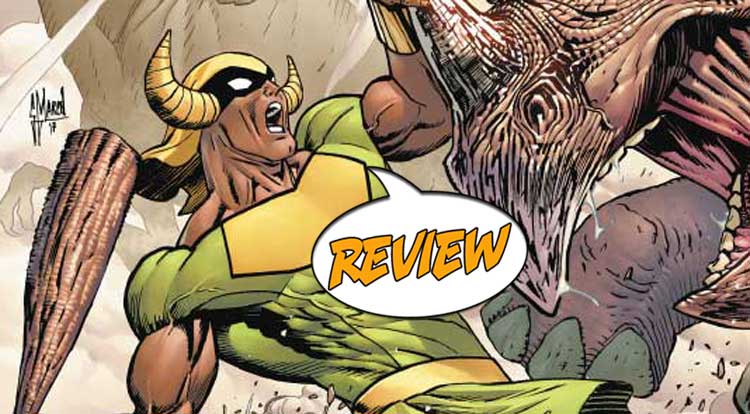 A signal to the stars returns, with a message from space.  But how does this involve our favorite club-wielding superhero, the Mighty Mightor?  Your Major Spoilers review of Future Quest Presents #8 awaits! Previously in Future Quest Presents: “An alien threatens to pressure the Earth into “joining” a galactic empire… and not voluntarily!  The first line of defense… the mighty Mightor!  Guest appearances by Jonny Quest and Hadji!”

As our story opens, we see the crew of a radio telescope poring over their incoming signals, certain that they’re receiving an incoming signal from an alien source, unaware that the alien Starpoint Collective is not only signaling but currently in orbit.  Starpoint’s representative has come to strong-arm Earth into joining their alliance or have the entire planet’s infrastructure turned off from space.  Cut to a birthday party, the thirteenth anniversary of the birth of young Tyson, also known as Mightor.  Ty is thrilled to find that Deva Sumadi, his overseer from Inter-Nation, interrupting his uncle’s long-winded story about how to keep your bar afloat in a tough economy with the news that his skills are needed.  As Mightor, he confronts the Starpoint “ambassador”, only to find that even the super-powers given to him by his magic club might not be enough.

Fortunately, his uncle’s advice is quite helpful…

This issue is a really fun read, with Lieber’s lively visuals making for some fun fighty-fight, but also making a quiet birthday party seem real and inviting/boring for a teenager with super-powers.  Ty’s cleverness really hammers home how much fun this character can be, especially when he gives up his power club to make a point to the alien interloper, but Jeff Parker’s script is full of neat little narrative moments and character bits.  (I especially like Deva’s explanation of where Birdman is, strongly implied to be the adventure in the previous arc of this title.)  The only real complaint that I have about this issue is inconsistencies in Mightor’s fighting togs (his yellow leggings seem to be missing inside the story) and, of course, my recurrent worry that this book isn’t going to last in today’s tough comic sales market…

If they do cancel this one, it’ll be a shame, because it’s taken the classic characters of sixties Saturday mornings and made them work in a modern context without unnecessary death, destruction or grimdark nonsense.  Future Quest #8 is an exciting read, with clear, exiting art and a clever callback built into the story (as well as a “graduation” moment for Mightor in the final pages), earning a well-deserved 4 out of 5 stars overall.  If you’re not reading Future Quest Presents, I’ll tell you what I’ve been saying since the first issue of FQ: You, my friend, are missing out…

A well-drawn, cleverly written done-in-one... What more can you ask for?