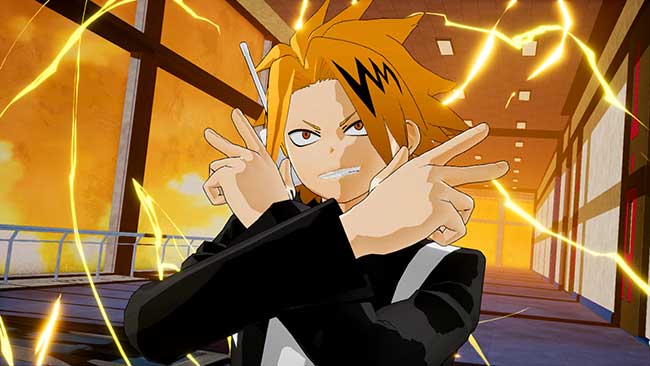 BANDAI NAMCO Entertainment today reveal more characters for My Hero Academia: One’s Justice scheduled to be launched in 2018 on PlayStation 4, Xbox One, Nintendo Switch™ and PC. · Tsuyu Asui is a U.A. student with a frog-like appearance. Her Quirk allows her to do anything a frog can do such as extending her tongue to a maximum of 20 meters. She can also stick to walls and use a Camouflage ability. Tsuyu’s hero costume changes colors along with her, in order to blend in with her surroundings. · Denki Kaminari’s Quirk allows him to channel electricity from his body and shoot it. He cares for his allies deeply and is often afraid of hurting them with his electrical powers. Once he knows they are safe, he can unleash his true powers using his special move “Indiscriminate Discharge 1,300,000 volts”. · Momo Yaoyorozu is the Vice President of Class 1-A. She is an extremely smart student who acts as a natural leader to her classmates, she was born in a famous Hero family and dreams of becoming a pro hero. Her Quirk is extremely powerful as it gives the ability to create any non-living materials via molecular manipulation. If she understands how something is made, she will be able to create it herself using her fat cells as material.

My Hero Academia: One’s Justice will be launched in 2018 on PlayStation 4, Xbox One, Nintendo Switch and PC.