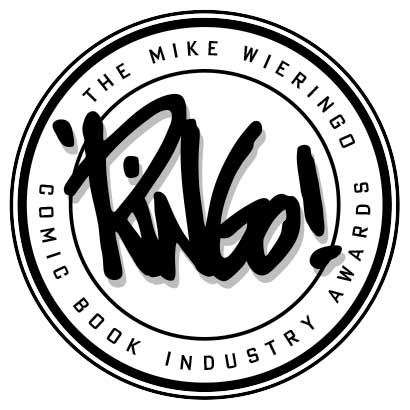 The Mike Wieringo Comic Book Industry Awards  has opened the nominations period for 2018, with the winners announced at The Baltimore Comic-Con.

Fan and pro-jury voting are tallied independently, and the combined nomination ballot is compiled by the Ringo Awards Committee. The top two fan choices become nominees, and the jury’s selections fill the remaining three slots for five total nominees per category. Ties may result in more than five nominees in a single category. Nominees will be listed on the ballot alphabetically. Nomination ballot voting is open to the public (fans and pros) between March 15, 2018 and May 30, 2018.

After processing by the Ringo Awards Committee and Jury, the Final Ballot are targeted to be available to comic creative professionals for voting on June 25, 2018 and will be due by August 31, 2018 for final tallying. Presentation of the winners will occur at the Baltimore Comic-Con on the evening of Saturday, September 29, 2018.

New in 2018, we have added two categories based on juror feedback from our inaugural year:

Open to Fans and Pros, we are now including “Best Kids Comic or Graphic Novel”. This category recognizes publications that are tailored to the evolving generation of comic readers, and one that Mike Wieringo would have been behind 100%.

In Fan-Only Favorites, we have added “Favorite Publisher” to the list, allowing readers to nominate the publisher they thought created the best works in the previous year. Will it be one of the big comics houses? An online company? Perhaps a book publisher? Did an indie publisher knock it out of the park? Your vote counts!

“While we had low expectations for our inaugural year, the 2017 results completely caught us off-guard,” said Marc Nathan, Baltimore Comic-Con promoter. “The nomination process participation was through the roof, the voting on the final ballot was healthier than we’d expected to see, and publisher donations for our Hollywood-style swag bags were fantastic! We hope you will return to vote in 2018, and tell your friends, family, and co-workers to participate as well.”

Michael Lance “Mike” Wieringo was known to fans and friends as “Ringo”, which is how he signed his artwork. His comics artist graced the pages of DC Comics’ The Flash, Adventures of Superman, Batman, and Robin, Marvel Comics’ Fantastic Four, Friendly Neighborhood Spider-Man, Sensational Spider-Man, and Rogue, and his co-creation Tellos. He passed away on August 12, 2007 at the young age of 44 from an apparent heart attack.

About the Ringo Awards

The Mike Wieringo Comic Book Industry Awards is an annual celebration of the creativity, skill and fun of comics. The Ringo Awards recognize outstanding achievements in over 20 categories, and are the only industry awards nominated by fans and pros alike, with final voting by the comic professional community. Launched in 2017, the awards ceremony is held annually at the Baltimore Comic-Con. Further details are available at www.ringoawards.com.

About the Baltimore Comic-Con

The Baltimore Comic-Con is celebrating its 19th year of bringing the comic book industry to the Baltimore and Washington D.C. area. For more information, please visit www.baltimorecomiccon.com