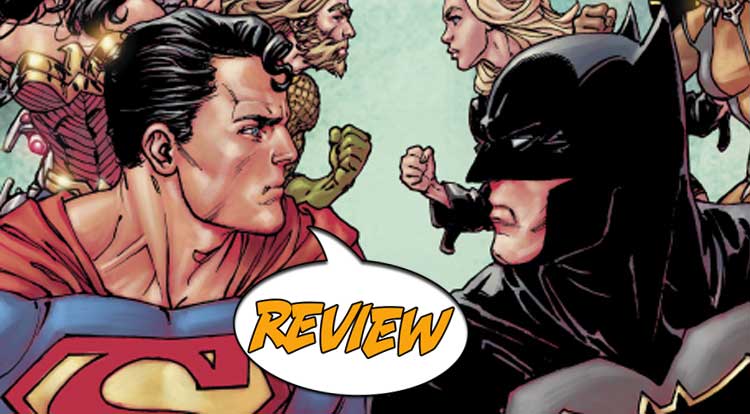 Leagues collide, and sides are taken!  Will Batman’s quirky Justice League Of America be able to hold up to the sheer power of the big guns in Superman’s Justice League?  Your Major Spoilers review of Justice League #40 awaits! Previously in Justice League: “Trapped aboard the crippled Watchtower, the combined Justice League and Justice League of America teams clash over leadership and the urgent question of who can be rescued… and who will be left behind.  Meanwhile, the Green Lanterns face critical choices over how to deal with the League’s two most powerful figures!”

THE CONTINUING THREAT OF ‘THE FAN’

So, this is a challenging issue in ways both good and less good, but as it begins we get something unexpected: Cyborg teleports into the assembled JL/JLA in the midst of a crisis, only to find that whomever has been sabotaging the Watchtower has reprogrammed it to reconfigure his armor.  Things quickly get heated as Batman’s team wants to step in and deal with a poison gas attack only for Superman to override his team leader and insist that they leave.  The presence of the heroes is impeding first responders, an argument that Batman agrees with, and both Leagues teleport back to the Watchtower just in time to realize that they’ve made a terrible mistake.  The orbital station is dead in the proverbial water, unable to maneuver, unable to teleport them out and slowly falling out of orbit.  A really difficult and very pointed discussion ensues over who can survive and how (in an amusing but terrible moment, Lobo just takes off to save his own skin.)  Arguments and counterarguments ensue, with Frost pointing out that Cyborg’s League is more important, as nobody even knows who her team is, while Superman refuses to be put on a pedestal and Batman hangs back in the shadows…

WHO LIVES…  WHO DIES

The decision comes down to Cyborg, who makes the only possible decision: Live or die, they ALL work together, and begins assigning BOTH Leagues to smaller teams to save their bacon.  I really enjoy Pete Woods’ art in this issue, combining as it does some excellent superhero design work with clearly defined facial expressions that make the emotions of the characters clear.  That’s important, given Christopher Priest’s script focusing on the people involved (to the point where Ray is uncomfortable with the racial implications of discussing whether or not they should save a neighborhood which is mostly POC after helping the upscale rich part of town, Frost’s bitter expectation that she is expendable, Vixen’s anger at being treated as ‘The B Team’ and Superman’s argument that all heroes matter, powers or no powers.)  Though there are unanswered questions, like ‘What is The Fan trying to achieve?’ and ‘Where are the Green Lanterns?’, it works as a chapter of an ongoing story.  It’s less successful as a standalone issue, even with the excellent character work…

With twelve heroes angrily talking at and over each other, this issue could have been a mess, but Priest masterfully balances the personalities well and makes this the issue to pick up if you wonder what the differences between Batman and  Cyborg’s Justice Leagues actually are.  Justice League #40 works even though I haven’t read Part One of the story yet, with lovely visuals and great dialogue, even though the threat seems a bit unfocused and perhaps even unrealistic, leaving us with a better-than-average 3 out of 5 stars overall.  Priest fans, fans of either League and fans of big casts endlessly clashing with one another should definitely give this one a look…

A test of Cyborg's leadership and creativity, showing off the various personalities of both Leagues with some really dark discussions about who should die...