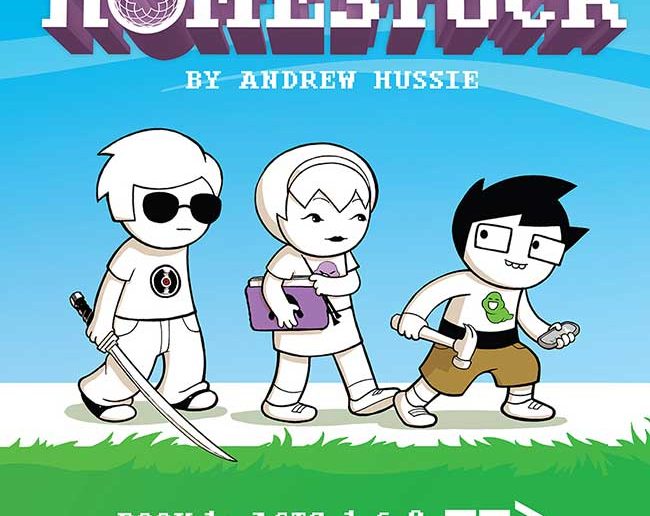 The popular webcomic will be released in a series of deluxe hardcover, full-color editions that each feature new cover art and commentary by series creator Andrew Hussie. HOMESTUCK BOOK 1: ACT 1 & ACT 2 is rated ‘T+’ for Older Teens and will carry a print MSRP of $24.99 U.S. / $33.99 CAN. The book also debuts digitally via viz.com and the VIZ Manga App, as well as from the Nook, Kobo, Kindle, iBooks, comiXology, and Google Play stores. Future volumes of the series will be published on a quarterly basis.

Written, illustrated and animated by creator Andrew Hussie, HOMESTUCK is one of the most spectacular pop-culture phenomena of the past decade, a unique and massive internet-based hybrid work consisting of webcomics, chat logs, gifs, video games, animation, and music. Launched in 2009, HOMESTUCK comprises over 8,000 pages encompassing such diverse genres such as action/adventure, sci-fi and fantasy, comedy, romance, and drama.

“We are very proud to debut the first book of these deluxe HOMESTUCK compilations in April,” says Leyla Aker, Executive Vice President & Publisher. “Filled with creator Andrew Hussie’s commentary, this is an essential (and entertaining) companion piece to a genre-defying story that changed the digital comic landscape.”

Years in the past, but not many, a webcomic launched that would captivate legions of devoted fans around the world and take them on a mind-bending, genre-defying epic journey that would forever change the way they look at stairs. And buckets. And possibly horses. Now, this sprawling saga has been immortalized on dead trees with notes from author Andrew Hussie explaining what the hell he was thinking as he brought this monster to life. A must-have for HOMESTUCK fans who want to re-experience the saga or for new readers looking for a gateway to enter this rich universe.

In HOMESTUCK, a young man stands in his bedroom. It just so happens that he’s about to embark on an adventure involving birthday cakes, magic chests, hammers, arms (detachable and otherwise), harlequins, imps, eccentric architecture, movable home furnishings, bunnies, and a video game that will destroy the world.

Additional information on HOMESTUCK is available at Homestuck.com.

For additional information on HOMESTUCK and other anime, manga and graphic novel titles published by VIZ Media, please visit viz.com.

Established in 1986, VIZ Media is the premier company in the fields of publishing, animation distribution, and global entertainment licensing. Along with its popular digital magazine WEEKLY SHONEN JUMP and blockbuster properties like NARUTO, DRAGON BALL, SAILOR MOON, and POKÉMON, VIZ Media offers an extensive library of titles and original content in a wide variety of book and video formats, as well as through officially licensed merchandise. Owned by three of Japan’s largest publishing and entertainment companies, Shogakukan Inc., Shueisha Inc., and Shogakukan-Shueisha Productions, Co., Ltd., VIZ Media is dedicated to bringing the best titles for English-speaking audiences worldwide.