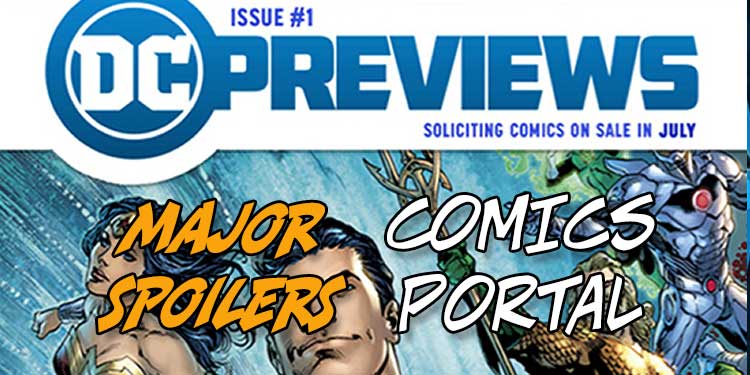 I rarely talk about Diamond two weeks in a row, but I came across a story indicating that, like Marvel and Image, DC is pulling their part of the Previews out of that monthly publication some of us refer to as “the phone book” because of its immense size.

All this will take place in May, according to various sources on the Internet.

THE FAN HUB IS SPLITTING UP As I’m sure many of you know by now, I’ve been buying comics for years now. And one of the ways I’ve known what to buy has been the Previews.

I mean, I’d always get it. Then, when the comics for the week were read, I’d dive into Previews, going from stem to stern as I looked for things of interest.

Probably my favorite story about this is when I discovered Mouse Guard there. I was going through the back section of the catalog when my eyes were riveted with this visually grabbing book I’d never heard of before. It had mice as they really are, but standing on their back legs as if they were more human. (I just despise anthropomorphic comics – the ones where mice look like humans with mice heads. AUGH!)

I immediately pulled out my order form and marked the first issue I could find, asking that Mouse Guard be something I get whenever something in that franchise appeared. I’ve loved it from that moment on.

I still make a practice of poring through the Previews, but it’s been a little tougher these days. I remember when Marvel began releasing their own Previews. Then I needed to be sure I got TWO books, not just one.

Then came Image’s turn, and now I’m up to THREE volumes to try and discover the good stuff in.

Recently I learned that DC is joining that group, starting in May with their own Preview book.

That makes FOUR books, for those counting at home, that I must go through each month. It’s starting to get a little daunting.

When Marvel pulled out, I remember talking with some of my friends about it. Marvel just didn’t want to be in competition with the rest of the industry. The reasoning went: After all, Marvelites Maximi only buy from the House of Ideas, so why bother them with the rest of the Previews?

Or worse yet, a Marvel fan might actually see something of interest from another publisher! GASP! That had to be prevented at all costs!

So, Marvel jumped ship. I’m not sure just what the results have been, but their own book must be getting the results the House of Ideas wants because they’ve been printing it for years now.

Then Image recently started their own book, another sign that Marvel’s book is at least somewhat successful.

So why make this move now? Here’s one possible explanation:

“For Previews readers, that means you’ll receive a copy of Previews, DC Previews, Marvel Previews, and the Image+ magazine – all for the price of $3.99,” said Diamond’s Previews editor Marty Grosser.

Or maybe there are enough DC folks that find other books they like that they decided to limit that bloodletting. Just a possibility.

In addition to the DC rollout, Diamond will also begin offering Previews digitally in May 2018, as part of a “special Previewsworld app.” Previews will be available as a standalone digital purchase, but also available free to those that purchase the print edition. We don’t know yet how much this will cost.

Now, this makes sense to me. See, I work part-time for a little community paper that does NOT believe in the Internet. They still print copies and distribute them at local businesses, where they can be picked up free of charge. I help lay out the publication, but I’ve had several conversations with the owner about the future of such things. She doesn’t think a change is coming soon, but I have a feeling she’s in for a surprise, and sooner rather than later.

I used to work for a major metropolitan newspaper in the Washington, D.C., area. I’m sure you can figure out which one it is because there just aren’t many of them left.

Slowly, the number of employees has decreased. I took an early retirement buyout because I could see the handwriting on the wall. It’s still in a sharp decline. We’ll see what the future holds.

One of the biggest reasons this kind of thing has been happening is the Internet. I can go read what stories I want without buying a daily paper copy, something that stacks up seriously after a few days and must be recycled. Sorry, I but I consider that a pain. I also can save the stories I want to read again to my hard drive, so I don’t even clip stories any longer.

So I heartily support what Diamond is doing here. I hope this will lead to customers being able to order online, which might take some of the burden off local shops. Of course, some might not want that happening, since it could decrease their numbers. However, if your order is somehow connected to our LCS, I don’t see a problem with it.

WHAT’S THE FUTURE FOR THE ‘PREVIEWS?’ The reason I bring all this up is that I wonder how much longer a paper version of the Previews will be printed. I mean, you have to pay for the cost of printing and delivery (granted, that last one is part of the delivery of comics as well), and comics fans tend to be more technologically savvy than others.

There may not be many months before the future catches up with Previews, and it’s digital only!

I mean, you could go to your local library and print the pages you find of interest if you don’t have a computer. I’m sure some means will be made available for orders to be placed, such as taking these completed sheets to the LCS.

Still, in the coming months, Previews itself looks as if it will continue to shrink in size. Who will be next to pull out? I don’t know, maybe Dark Horse? They have an enviable location at the beginning of the Previews, though, so it may be IDW, who is farther inside.

What do you think? Is the moving outside of the Previews volume a good thing? Or is it making picking out the books you want more difficult? Please be sure to share your thoughts in the space below!