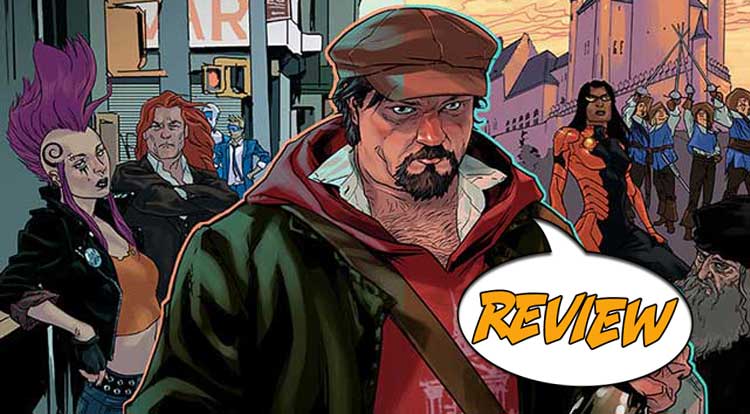 Armstrong and The Vault Of Spirits #1 Review

Once a year, an immortal opens his secret vault of ancient wines and spirits, sharing them with his friends and family.  This has a tendency to attract attention, but it’s cool: His friends are mostly superhuman…  Your Major Spoilers review of Armstrong and The Vault Of Spirits #1 awaits! Previously in Armstrong and The Vault Of Spirits: “Deep beneath New York City’s seediest dive bar, Armstrong – the hard-hitting, harder-partying immortal veteran of history’s greatest escapades – is hosting an invitation-only affair for his most beloved friends and allies!  Archer…  Ivar, Timewalker…  Faith…  Quantum and Woody…  And special guests from across the Valiant Universe…  All have been offered a seat at the table for a personally guided tour of Armstrong’s most valuable and tightly guarded treasure.  From the Great Flood to ancient Greece to the height of the Crusades, raise a glass as Armstrong recounts the true stories of his wine-soaked path down through the ages and the artifacts that reside within his own secret archive!”

We open in New York, as Armstrong greets his dearest friends as they arrive for an unusual celebration.  It’s an odd group of characters, including Quantum & Woody, Faith, Punk Mambo and more, all of whom have been invited to enjoy his secret wine cellar, programmed to open only once per year.  The arrival of big brother Ivar, the Time Walker, makes it clear that this may be an unusual meeting, as he’s clearly unhappy with his baby brother’s antics, and not for the first time in their ten thousand years.  Of course, friends aren’t the only ones interested in the hooch within, as a number of secret societies are aware of his ritual and have come together to invade and either get revenge, get rich selling his stash or empower themselves through the wine itself.  This actually leads to one of the better introduction sequences in recent memory as the assembled villains identify each newcomer in turn, remind each other why they’re there and engage in a group battle cry before getting the smacketh laid downeth on their collective faces.  This story is intercut with flashbacks to Armstrong’s interactions with the legendary Noah after the Great Flood (all of which upsets his partner Obadiah Archer greatly.)

Darick Robertson’s past sequences are charming as heck, especially when Noah is shown to be a braggart and a jerk who coasts on Armstrong’s knowledge of winemaking, but Cafu’s present-tense is equally interesting, if perhaps a bit stiff.  The strength of Van Lente’s script comes in the characters, especially when Armstrong and his tetchy brother discover why Punk Mambo was invited: To channel the spirit of their missing, currently-dead brother Gilad so that the siblings can celebrate one more year together.  It’s a sweet ending, one of several such touching moments in the comics, making for a memorable one-shot story with a nice kicker.  Best of all, the balance between battle and story is maintained, and Armstrong even gets to convince another immortal that his life is only what he makes it, showing that there’s depth even to our undying drunkard buddy…

Like Armstrong himself, this book gets by on sheer charm, delivering an entertaining story full of lovely dialogue and characters, as well as strong work from both art teams, leaving Armstrong And The Vault Of Spirits #1 with a well-deserved 4 out of 5 stars overall.  It’s always nice when a relatively simple premise is able to deliver a touching, silly, fun, exciting bit of story, and this one fits the bill…

A little faux history, a little family dynamic and some cute character moments make for a nice one-shot story...