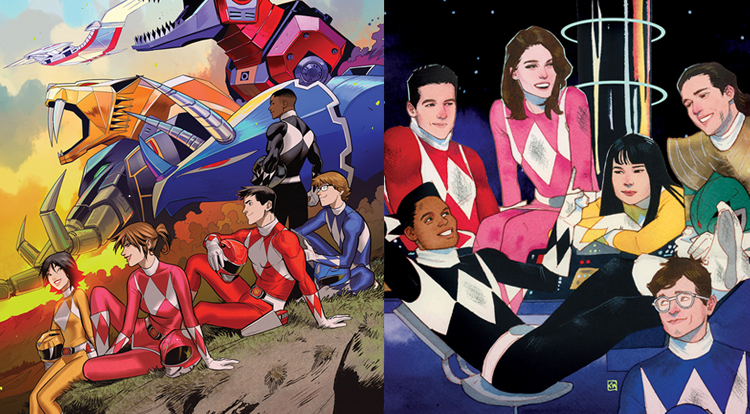 Whither The Power Rangers – A Comparison Study Since 2016, BOOM!’s main Power Rangers title has been ‘Mighty Morphin’ Power Rangers’, a story that picks up shortly after Tommy Oliver joins the team as the Green Ranger.  Interestingly, the comic tells the story of the Ranger’s debut in a modern setting circa 2015, with Jason, Billy, Zack, Trini, Kim and Tommy learning the ropes of their new super-identities with modern trappings, cell phones and the like.  Most impressively, the series allows writer Kyle Higgins and an array of artists the ability to tell stories that wouldn’t have been possible on television thanks to budgetary and logistic issues.  Most recently, the team has completed a time-traveling adventure combating an evil Ranger, Lord Drakkon, whose secret identity is a pretty shocking moment that I’m not giving away.  (There may be a hint if you look closely at that armor, Faithful Spoilerites.) Of course, the threat of Drakkon may not be quite as wrapped up as the MMPR would hop, as ‘Mighty Morphin’ Power Rangers’ is about to embark on another storyline that could not happen on television with ‘Shattered Grid’, which promises to celebrate the 25th anniversary of Power Rangers with a time-and-space spanning crossover involving other Ranger teams from across time and space. So, if the main title is dealing out big-time adventure and crossing the time-streams, what’s the deal with ‘Go Go Power Rangers”?  GGPR is a book that promises more of the Rangers’ personal lives, telling us about the kids inside the helmets, with early issues featuring Jason finally explaining the motivation for his martial arts discipline as well as the story of Kimberly’s complicated relationship with a young man named Matthew, which I’m taking as a shout-out, just because I can.  ‘Go Go Power Rangers’ helps to fill in some of the blanks left by the breakneck storytelling of the original TV series, providing more insight into the psyches of the Rangers. Focusing more on the personalities of the Rangers (and more, including backstory for Rita and her gang of goons and monsters on the moon) does NOT mean that the book is short on action or morphin’,  as there is plenty of action to be had, just with more focus on the actual people within the helmets.  Also worth the price of admission for a Mighty Morphin’ fan like myself are additional explanations for the logistical questions of Power Rangers, such as why our friends have such unfettered access to the Angel Grove Youth Center and how they cover for their absences with their parents.

So, the short answer is that ‘Mighty Morphin’ Power Rangers’ is a series that tends to be action-oriented, while ‘Go Go Power Rangers’ features more personal looks into the lives and minds of our favorite teenagers with attitude, and thus you can make the decision of which series is for you!  As for me, I think the answer will have to be “both”, especially with the upcoming anniversary crossover affected both series, but mileage, as always, may vary.