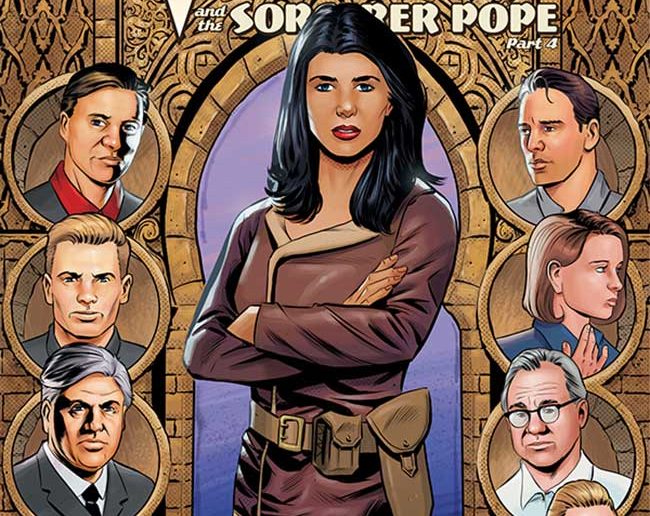 [Solicitations] Action Lab Entertainment for May 2018 STRONGER Part 2! As Gavin reels from Lionsblood’s last act, the Cutter Brothers begin their hunt for the strongest that Apollo Bay has to offer. And their next recruit is…Midnight Tiger?! The first story arc concludes as Athena and the team face off with the Nazis in a hidden temple. What mysteries are contained within the bronze head? Will Athena live long enough to find out?

The Ghoul Scouts formulate a risky plan to corral the werewolf, but there’s a new threat on the horizon! Eldrick’s latent powers are revealed! Thrust into a seemingly inescapable predicament, Eldrick and Gwyn scramble to conceal his abilities. Meanwhile, Luna moves to intercept her target — the boy who bears the Spellsword blood — while a magi-hunting Helmar closes in on her. Following the death of her father 16-year-old Jacqueline “Jacky” Johnson inherits a jetpack with a mysterious power source and together with her brother, Chuck, and their cat she must protect her home from a threat that may – or may not – be from this Earth! Ladybug and Cat Noir must face off against three more of Hawk Moth’s akumatized victims. Chloé, after an argument with her hero Ladybug, turns into Antibug, her evil twin with the exact same powers! Then, while Marinette is babysitting Manon, the young girl gets upset and becomes Puppeteer, gaining the ability to control some of Ladybug’s former foes, including Lady Wifi, Evillustrator and Rogercop. Finally, Lila, who is humiliated in front of her crush Adrien, becomes the villain of illusions, Volpina. Will the two greatest superheroes in all of Paris be able to stop so many villains at once? Find out in the final volume of season one! Everything has been going perfectly for Sunshine. She’s living on a protected island where everything she needs is provided for her. She’s been set up with a beautiful girl who’s head over heels for her. So why can’t she just be happy and ignore the feeling in her gut that something is wrong with this place?

Raven, on the other hand, has never been more miserable. She’s gone from swordfighting to sulking and Ximena won’t even speak to her.

A storm is coming and everything’s about to change… Humans have always been a fact of life for most bittles…but not for Minky, who comes from the sea! When the other students try to introduce her to the world of human junk, she doesn’t feel very at home. Only a secret scheme among the other students can make things right…unless they get eaten by squirrels first!