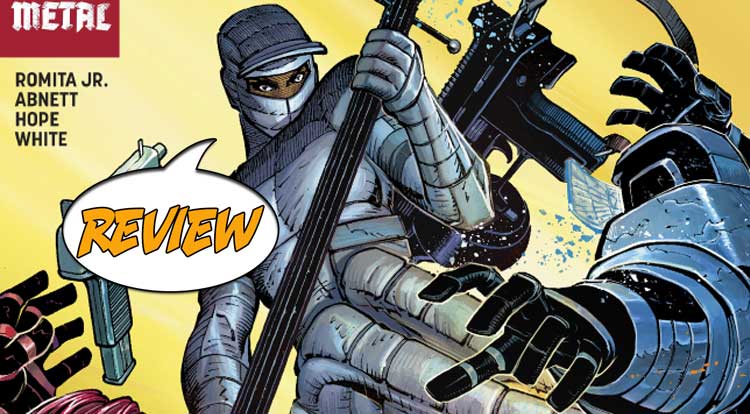 Can the world’s greatest assassin give it up and raise a happy family in the suburbs?  Not if the people who have taken down Talia al Ghul have anything to say about it…  Your Major Spoilers review of The Silencer #2 awaits! Previously in The Silencer: “The world’s deadliest assassin thought she was out… but the past won’t let her leave!  Talia al Ghul’s violent disappearance has led to a mystery that could cost Honor Guest the lives of her family and to defend those she loves, Honor must once again don the mantle of the Silencer!  Seeking information from the neutral ground of the assassin’s armory, Silencer gets more than she bargained for as the most monstrous forces of the underworld descend for the kill!”

A WAR WITHIN LEVIATHAN

Open with a big ol’ fight!  Silencer has been ambushed in her quiet suburban neighborhood by a couple of 90s-looking super-assassins, Breacher and Bloodvessel.  For a moment, it looks like this is the end for Honor Guest, but she quickly puts the lie to that, taking out her attackers with extreme prejudice (one is riddled with bullets, the other has his exoskeleton battered to pieces.)  Honor then calls for a cleanup, which brings in the resources of her former employer to clean up all the blood, glass and debris, even replacing her destroyed SUV with a perfect duplicate!  It’s a fascinating moment, made even more fascinating by her actions the next morning: Contacting the mysterious Remedy to make it clear that she’s out.  They meet at a “Maul-Mart”, a warehouse full of super-assassin gear, but sadly, this particular Remedy (the story makes it clear that it’s a position, not a person) doesn’t like Honor or fear The Silencer.  He demands the location of her former boss Talia al Ghul, but Silencer isn’t talking, leading him to reveal his cloaked agents, offering her five seconds to give up the information.

She replies that, in three seconds, she’ll kill every person in the room…

DISTRACTED BY HER HEADGEAR

There’s a lot to like about this issue: I find the details of HOW these superhuman assassins operate, their support systems, clean-up crews and weapons depots to be fascinating, and seeing Honor negotiate both those channels and the role of doting mom is adorable.  That said, I just can’t get past her helmet.  Is it supposed to look like a baseball cap?  A flip-up visor?  Is it both?  The art seems to vacillate back and forth, and every panel with the Silencer outfit in it is distracting.  John Romita Jr. is a very particular artist, though, and as his style evolves, he has had many moments where I don’t enjoy his work.  This issue reminds me of a slightly more stylized version of what we saw from him in the pages of ‘Kick-Ass’, which means that his explosions and fights are excellent, his quiet moments feel realistic and grounded, but the transitions between them are sometimes a bit awkward.  I’m also not a fan of the bright yellow (that almost looks green in some panels) tone that they’re using for Honor’s hair, but given the strength of the story and the fascinating detail, none of the art peccadilloes are deal-breakers for me…

BOTTOM LINE: A GOOD BOOK WITH SOME VEXING PANELS

If you’ve been thinking of this book as “DC does Marvel: The Punisher”, as I have, I have some good news for you: It is clearly and distinctly its own thing  and that thing makes for an entertaining read.  The Silencer #2 is a really well-written and thought-out story, featuring dynamic art and some fascinating concepts about Leviathan, Talia and the logistics of a league of assassins, with a few flaws that are more distracting than damaging to the narrative, earning a better-than-average 3.5 out of 5 stars overall.  I’m definitely in the camp of wanting to know more about this hero/protagonist and the world she inhabits…

There's a lot to love here, and the dramatic punch of the art is impressive, with only a few flaws in the details...