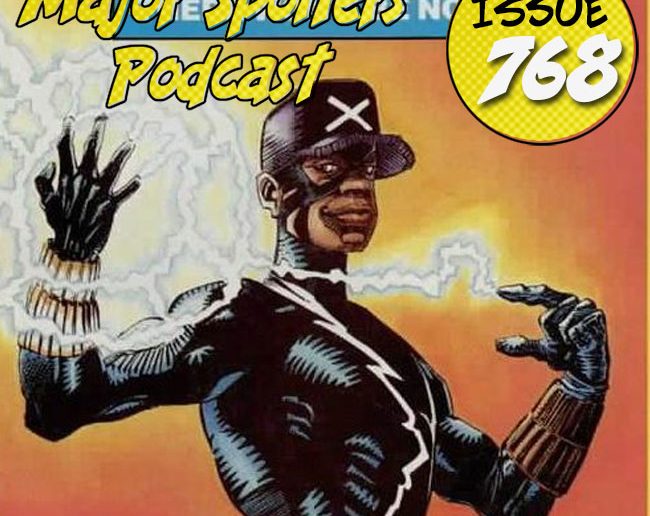 This week on the Major Spoilers Podcast: Static brings a shock to the system, while the cover issue challenge continues to heat up. We also review Cult Classic: Return to Whisper #1, Wonder Woman/Conan #6, The Tick Season One, and The Terrifics #1.

REVIEWS
STEPHEN
CULT CLASSIC: RETURN TO WHISPER #1
Writer: Eliot Rahal
Artist: Felipe Cunha
Publisher: Vault Comics
Cover Price: $1.99
In 1997, a group of teenagers discover a treasure of immeasurable wealth. Fearing that their newfound fortune will be stolen from them, they make a pact: One day they’ll all come back as adults, divide their riches, and live happily ever after. Fifteen years later, they have returned. Not to uncover a fortune, but to bury a friend. From Eliot Rahal (Ninjak vs. The Valiant Universe, The Paybacks) & Felipe Cunha (Flash Gordon, Turok) comes the first full-length series in the much-anticipated Cult Classic Universe!

MATTHEW
WONDER WOMAN/CONAN #6
Writer: Gail Simone
Artist: Aaron Lopresti/Matt Ryan
Publisher: DC Comics/Dark Horse Publishing
Cover Price: $3.99
The final battle is here! Diana has regained her sense of self—and with her mind and memory intact, she’s an unstoppable force. Conan believed her to be his lost childhood love, and the revelation of her true destiny does nothing to lessen his admiration for the warrior he fights beside. The Corvidae may live to regret their wager. Copublished with Dark Horse.

RODRIGO
THE TICK SEASON ONE (Part 2)
Amazon Studios
In a world where superheroes have been real for decades, an accountant with mental health issues and zero powers comes to suspect his city is owned by a global super villain long-thought dead. As he struggles to uncover the conspiracy, he falls in league with a strange blue superhero. They launch into an adventure brimming with crazed archvillains, blood-soaked vigilantes, and superhuman freakery.

ASHLEY
THE TERRIFICS #1
Writer: Jeff Lemire
Artist: Ivan Reis
Publisher: DC Comics
Cover Price: $2.99
Bound together by fate, united by the spirit of exploration and hope for tomorrow, the Terrifics bound from the Dark Multiverse of Meta! When Mr. Terrific, Metamorpho, Plastic Man and Phantom Girl find themselves literally bound together by a tragic accident, our team of unlikely allies must rely on one another to make their way back home. But a startling revelation on their return trip brings them face to face with a new mystery: where in the universe is Tom Strong?

DISCUSSION
STATIC
Writer: Dwayne McDuffie
Artist: Denys Cowan
Publisher: Milestone
A Black teen, Static was a key character of Milestone Comics, an independently-owned imprint of DC Comics with a greater representation of minority heroes. Dwayne McDuffie has stated that the creation of Static was a group effort.[citation needed]Originally developed for Marvel Comics, Static would become a main staple of the Milestone line. Much of the inspiration for Static came from Marvel’s Spider-Man. When initially creating the first five characters for Milestone Comics, it was decided that Static would be created as a teenage hero who was a contemporary version of Spider-Man. Static’s civilian identity, Virgil Hawkins, was named after a black man who was denied entrance to the University of Florida’s law school in 1949.Milestone ceased publishing comics in 1997, but Static was saved from obscurity by The WB animated series Static Shock, which aired for four seasons and led to the 2001 comic book miniseries Static Shock: Rebirth of the Cool. The 2009 trade paperback of this series was nominated for a Glyph Comics Award for Best Reprint Collection.