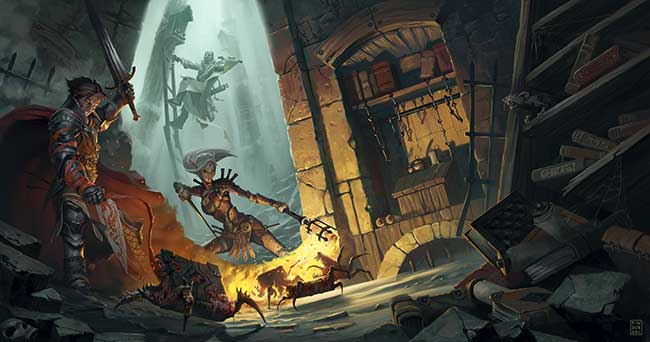 [Gaming] Pathfinder is coming to Roll20.net

Big news this morning for tabletop gamers who use Roll20; Paizo has teamed with Roll20 to make Pathfinder full integrated with the online system.

The press release contains all of the information about the Pathfinder AND Starfinder integration. It isn’t a free service, but does follow the model Wizards of the Coast has with Roll20.net.

“The Roll20 community has been vocal for years about wanting official Pathfinder support on our platform and we are very excited to start providing it,” said Nolan T. Jones, Managing Partner of Roll20 in the press release. “The added benefit of getting to be part of the already successful first voyages of the Starfinder universe only makes this better.”

The Roll20 Virtual Tabletop provides a full suite of easy-to-use digital tools so players can build characters and run campaigns seamlessly through their web browser. With character sheet automation, simple click-to-roll attacks, and built-in video and voice communication, players can quickly craft stories as a group. Pre-made adventures and fully-integrated bestiaries allow Game Masters to run games with minimal setup, while effortlessly enjoying features such as dynamic lighting and advanced fog of war to build tension on what’s right around the corner… or creeping up from behind.

We had a lot of fun playing Pathfinder on the Critical Hit podcast, and I expect we’ll explore Pathfinder and Starfinder in the future. Of course it will be a while before we return to the gaming system, which should give everyone plenty of time to test the system, see what improvements need to happen, and see how easily the two systems integrate with one another for homebrew games.