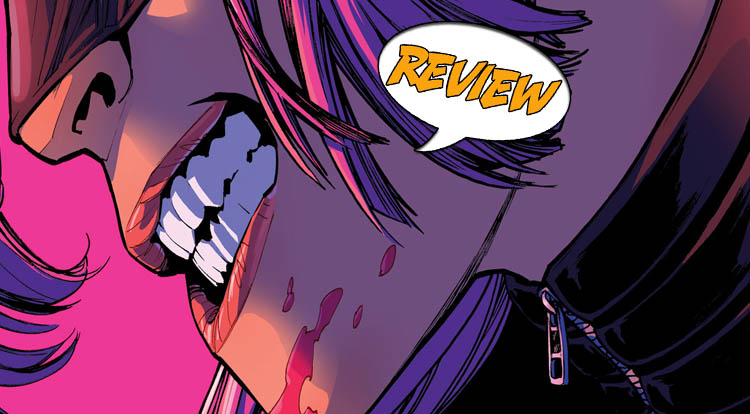 Mindy’s back!  But what in the world is she up to now?  Your Major Spoilers review of Hit-Girl #1 awaits! Previously in Hit-Girl: “The pint-sized Punisher-meets-Polly-Pocket has left America behind and set off to serve justice around the world.  First stop: Colombia.  A mother seeking vengeance for the murder of her child enlists Hit-Girl to destroy his killer, but Mindy has bigger plans for Colombia’s most feared hitman…”

A SENSE OF CIVIC DUTY

We open with the villainous assassin called Mano being taken away in shackles, having finally been brought to justice for his crimes.  Suddenly, the caravan carrying his is attacked and Mano’s friends and family are overjoyed to see that their favorite son has again escaped justice…

…buuuuut, he hasn’t.  He’s been taken into custody by Hit-Girl, who (after a new Kick-Ass flaked out on her while casually shooting down the entire dramatic motivation for the original Kick-Ass story as a throwaway joke, which kind of irks the heck out of me) is in the market for a new partner.  With a little bit of sweet talk and a little bit of murder, she brings Mano around to her method of thinking, and the issue ends with our new duo ready to take to the streets for some mayhem, and a really nice shot of Mindy’ massive armory.

The original idea of Hit-Girl seemed to be “foul-mouthed twelve-year-old as a psycho killer” for the lulz, and it worked okay within the framework of Dave Lizeswki’s story, mostly because she was the only competent person in the book.  Having one actual fighter in what is ostensibly a superhero comic was okay, but each new iteration in Kick-Ass’ story has added additional crazy wrinkles to the point where this is a world as over the top as any other story, which blunts Mindy as a character.  I am impressed with Ortiz’ art, taking a sharp left turn from John Romita Jr’s, and delivering a cartoonish edge that actually works with the maybe-satirical material and has a loose-limbed energy in all the fight sequences, and makes the bloody parts work on a level other than ‘horrifying.’

BOTTOM LINE: NOT SURE I WANT TO SEE WHERE THIS IS GOING

After really enjoying the recent Kick-Ass relaunch, I had hoped that we’d get a something just as transformative here, but Hit-Girl #1 turns too far into the skid, delivering a story that tries too hard for me, never quite working as a straight story or as a satirical mockery of ultra-violence, earning a right-down-the-middle 2.5 out of 5 stars overall.  I don’t know that I’m going to be reading the rest of this one, sadly…

An interesting take on the art, but Millar's story feels like it's trying too hard to hit all the hardcore buttons at once...