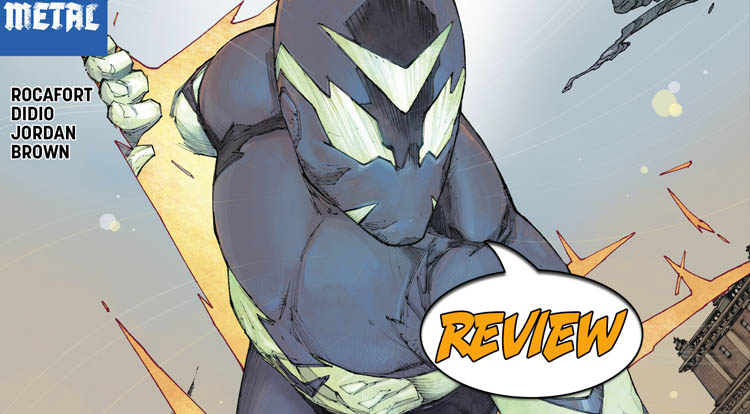 There’s a new hero in town! But there’s something very familiar about him…  Your Major Spoilers Review of Sideways #1 awaits! Previously in Sideways:  “During the events of DARK NIGHTS: METAL, high school junior Derek James accidentally fell through a rift into the dark matter dimension!  Now, as Sideways, he can create rifts in midair to leap through dimensions at will!  But with that much power comes great liability – and cracks are starting to form in the fabric of the space-time continuum…”

We open early in the morning, in the bedroom of a teenage girl, just as a strange man teleports in behind her!  Thankfully, all is well, as this young woman is Ernie, best friend of our hero, Derek James, and the teleporter is Derek/Sideways himself.  The dialogue quickly gives us a crash-course in Derek, revealing his strength and toughness, his nerdy demeanor and his relationship with Ernie.  He quickly pops out before discovery, heading home just in time for us to meet his parents and get a thumbnail origin for the character.  The dialogue helps to smooth over the infodump, but it still feels a little bit clinical to me, following Derek to school and then out into the world as he debuts his new identity on “livestream.”  Things get weird when a booming voice orders him to stop breaching the boundaries of space, leading to a few pages of quick teleport trips, leading to Sideways hanging from the edge of a skyscraper while a massive armored figure informs him that the wages of teleporting… is death!

STILL MISSING A STEP OR TWO

I keep hearing people saying that this book is an attempt to recapture Spider-Man in the DC Universe, but I’m reminded of nothing so much as Milestone’s Static circa 1994, with the cute platonic girlfriend, the clear amount of research into making Derek sound at least somewhat authentic as a teen and the emulation of young Peter Parker.  The design of the character and most of the preliminary art were intentionally Spidey-flavored, but the issue itself escapes that trap for the most part, only to fall into a different one: First Issue Explanation Syndrome.  There’s a lot of stuff that gets delivered in this issue, and in so doing, it feels like the story of WHAT Sideways is going to actually BE is set aside in favor of a lot of exposition, though the story of his origins and four days spent lost in time/space is well done and quite harrowing to read.  Kenneth Rocafort’s art is quite charming, though, and the character’s look (both in and out of costume) is well thought out and handled.

No matter what the intent of the character is, jumping into the Teen Hero game naturally brings the Spider-Man comparison, and having a character with moves and mask and general motif that emulate that is a dangerous game.  Sideways #1 brings a lot of new things to the game, but gets a bit bogged down in setting up the board and pieces and falls short in terms of story, but it has dynamic visuals, believable dialogue and potential, leading to a not at all bad 3 out of 5 stars overall.  It’s a book that has a chance to really build an audience, but this issue skimps a bit on actual plot and incident for my tastes…

A lot of interesting pieces that don't quite come together yet...