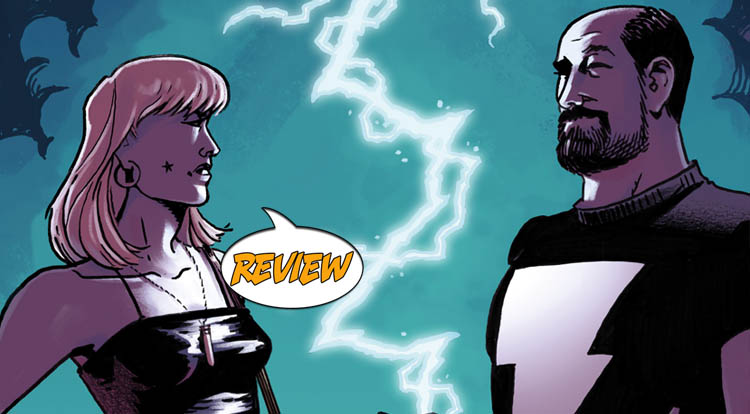 A new town and an undercover lifestyle have Kevin Matchstick feeling restless, but it seems that bad things are on the horizon.  Whether that’s good or bad seems to be up for discussion…  Your Major Spoilers Review of Mage Book Three: The Hero Denied #6 awaits! Previously in Mage Book Three: The Hero Denied: “Over a year after relocating in order to escape their supernatural enemies, Kevin Matchstick and his family have slowly settled into their new hometown.  As Magda searches for the perfect house to anoint with her protection potion, Kevin feels powerless and trapped by his enforced inactivity.  Meanwhile, the Umbra Sprite has spent the intervening months cocooned in darkness for the cost of her summoning.  Kevin’s ennui is relieved by an unexpected visit from Joe Phat, who reveals the sad news that their former comrade, Kirby Hero, has died.  Their reminiscence is broken by the sudden appearance of a rare and mysterious creature…”

Picking up right where last issue left off, Kevin and Joe are shocked to see the rare Questing Beast just hanging out in an alleyway.  Kevin insists that they pursue like the old days, but Joe isn’t interested, bolting off at superhuman speed and leaving Matchstick without leads or any way to catch the thing.  (Jerk move, Joe.)  Heading home, he discovers that he’s much later than he thought, leading to a small argument with his wife and a reminder that he has to stay under wraps to protect the family.  Kevin grudgingly agrees, even to a work function at the school where Magda teaches, but can’t help but seek out the Q-Beast with a little magical help.  As the issue comes to a close, Kevin is stalking through the night, eyes full of magical potion, while Magda’s cover may be blown by none other than her boss, the school superintendent!

DANGER FROM AN UNEXPECTED DIRECTION

There was a slightly confusion jump in the narrative last issue, but this one clarifies the changes that have happened in the Matchstick family’s life and makes it all clear through a very real feeling marital argument.  Wagner’s ear for dialogue is still excellent, and I can’t help but find parallels to past arguments I’ve been afraid of.  Every character in the issue feels real, all with their own intents and conditions, so when Joe Phat takes his leave or a slightly unsavory potions dealer makes an ominous comment about Kevin owing him one, the actions all feel motivated and correct.  On the art side, we have a really gruesome moment with the Umbra Sprite trying to find the true Fisher King (it involves birds, flayed skeletons and the people who previous used them and… bleeech) perfectly balanced with Magda’s mundane work function.  The final page is shocking both for the readers and for Magda, making for an utterly unexpected cliffhanger that promises more conflict in the future…

THE BOTTOM LINE: A MASTER AT HIS CRAFT

Having read Matt Wagner’s work for my entire adult life, I occasionally worry that I’m biased about his talents, but this series makes it clear: We’re witnessing a confident, skilled artist working diligently and carefully to tell a story he’s been putting together for decades, and it shows in every panel.  Mage Book Three: The Hero Denied #6 is building conflict from not only the magical world but in Kevin’s friendships and family relationships, and I am seriously unnerved by it all, leaving this issue with a solid 4.5 out of 5 stars overall.  The only excuse not to read this one is to wait for the trade…

Matt Wagner is at the top of his game, things are getting complicated for Kevin in both his personal and his magical life, and I'm afraid it'll get worse before it gets better...