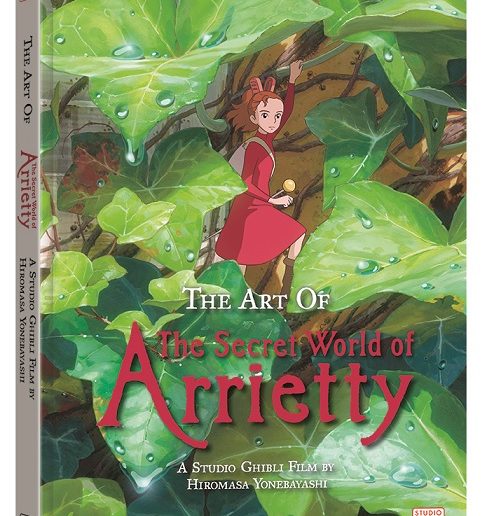 VIZ Media, LLC (VIZ Media), a premier company in the fields of publishing, animation distribution, and global entertainment licensing expands its renowned Studio Ghibli library with the release of a new hardcover edition of THE ART OF THE SECRET WORLD OF ARRIETTY on March 6th. The vividly illustrated art book will be released exclusively in print with an MSRP of $34.99 U.S. / $46.99 CAN. It features story notes, commentary, and artwork from The Secret World of Arrietty. Based on the classic novel by Mary Norton, the 2010 film was directed by Hiromasa Yonebayashi, the youngest director to ever helm a film for Studio Ghibli. The studio’s founder, Hayao Miyazaki, also supervised the production of Arietty as a developing planner. Yonebayashi has gone on to direct When Marnie Was There and Studio Ponoc’s first feature film, Mary and the Witch’s Flower.

“THE ART OF THE SECRET WORLD OF ARRIETTY features hundreds of character and production sketches as well as insights from director Hiromasa Yonebayashi and other key creators involved with the film,” says Masumi Washington, Editor. “We invite readers to dive deeper into The Secret World of Arrietty with this beautiful hardcover release.”

VIZ Media’s Studio Ghibli Library is exclusively devoted to the work of iconic Japanese film director Hayao Miyazaki and his famed animation studio. The imprint has collected a substantial catalog of full-color art books, film comics, picture books and other releases celebrating Studio Ghibli films such as Princess Mononoke, The Wind Rises, Howl’s Moving Castle, The Secret World of Arrietty, Ponyo, Spirited Away, Kiki’s Delivery Service, My Neighbor Totoro, Nausicaä Of The Valley Of The Wind, and Porco Rosso.

Established in 1986, VIZ Media is the premier company in the fields of publishing, animation distribution, and global entertainment licensing. Along with its popular digital magazine WEEKLY SHONEN JUMP and blockbuster properties like NARUTO, DRAGON BALL, SAILOR MOON, and POKÉMON, VIZ Media offers an extensive library of titles and original content in a wide variety of book and video formats, as well as through officially licensed merchandise. Owned by three of Japan’s largest publishing and entertainment companies, Shueisha Inc., Shogakukan Inc., and Shogakukan-Shueisha Productions, Co., Ltd., VIZ Media is dedicated to bringing the best titles for English-speaking audiences worldwide.