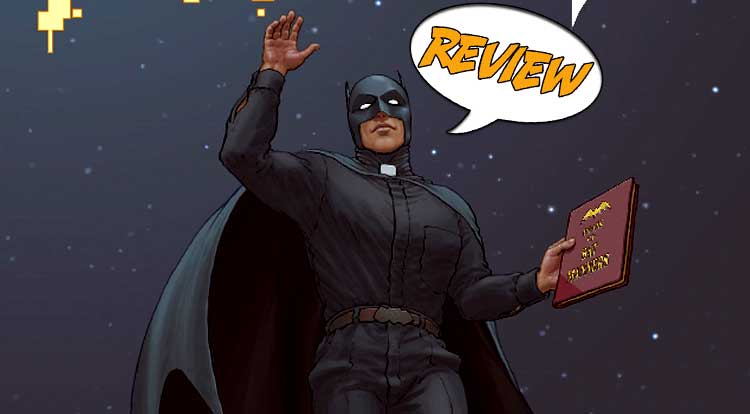 Gather House, the terrible place that made Mother Panic who (and what) she is today, is back in operation.  And there’s a familiar face at the helm, begging the question: IS everything better with Batman?  Your Major Spoilers review of Mother Panic/Batman Special #1 awaits! Previously in Mother Panic/Batman: “Mother Panic has discovered a Gotham City transformed.  What happened to her family and friends?  And who moved into Gather House, the religious school that scarred Mother Panic as a young girl?  It’s Father Bruce, the orphan millionaire who decided to give back to society by filling the deep demand for sidekicks. So many Robins in need of a nest!”

This issue opens with a Cliff Notes version of Violet/Mother Panic’s origin (a smart move, given that this is a Batman crossover and she’ll likely be exposed to quite a few new readers) in conversation with her mother, who is clairvoyant but not always coherent.  One part of mom’s prophetic visions is clear, though: Gather House, the place that made Violet into an angry cyborg vigilante in the first place, is back in operation.  Taking to the skies, Mother Panic finds that not only is the building suddenly back, it’s populated by costumed children, all under the supervision of Father Bruce, a transformed version of Batman.  Whatever The Milk is, it has turned the Dark Knight into a pseudo-priest, and his retinue includes Rosie, a little girl who has been part of Mother Panic’s story before.  (She, like Batman, lost her parents in a shocking moment in the alleys of Gotham.)  Mother Panic figures out what’s going on with the Bat, defeating The Milk in truly clever fashion, but as the issue ends, Batman arrives with Cave Carson’s cybernetic eye, taking Mother Panic along with him to answer Cave’s emergency summons…

I’m really torn on whether I want to see Rosie (who wears a mask and calls herself Fennec Fox as one of Father Bruce’s orphan army) stay a part of the Mother Panic series, but I have to say that it’s impressive that she and her would-be mentor really stole the spotlight from Bats in this issue.  Ty Templeton delivers an incredible art job in these pages, giving Father Bruce a cowl that feels like the live-action ’66 Batman and giving each of the “Robins” their own look.  His Batman is impressive, but his rendition of Mother Panic’s strange vulpine helmet is incredible.  Add in a strong script by Jody Hauser which, like the JLA/Doom Patrol crossover, keeps the Young Animal characters on their own turf while making the old-school guys over into something terrible.  The issue also includes worrisome foreshadowing by Mama Paige that things are not going to end happily for her daughter…

If I’m honest, I liked the first chapter somewhat more than this one, but that’s more a matter of my loving team titles and the current Justice League of America lineup than anything wrong with this comic.  It’s not as metatextual as the first chapter, but it is equally disturbing in the best way, leaving Mother Panic/Batman Special #1 with a very respectable 3 out of 5 stars overall.  I truly hope that this ends up being a bump for the Young Animal books, but a cynical part of my mind  remembers what happened to Milestone after their crossover with the mainstream DCU back in the day…

Not quite as engaging as the first salvo, but an interesting juxtaposition of new and old Gotham City vigilantes nonetheless, and Tempton's art is sublime