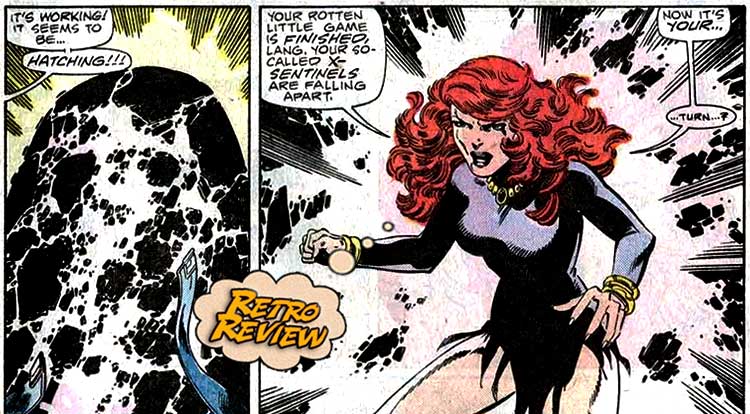 With the recent return of Jean Grey from the proverbial bleedin’ choir invisibule, it seems like an excellent time to look at her FIRST return from the clutches of death…  Your Major Spoilers (Retro) Review of Fantastic Four #286 awaits! Previously in Fantastic Four: During one of their inexplicably frequent space missions, The X-Men were forced to flee Starcore space station in a damaged shuttle, with Jean Grey at the helm.  The damage to the ship, however, meant that whomever piloted it would be exposed to fatal amounts of solar radiation, but Jean held it together long enough for an emergency crash landing in Jamaica Bay.  She arose from that crash empowered as The Phoenix, with the explanation that the radiation super-charged her mutant cells or some such, turning her into the most powerful telekinetic/telepath ever seen.  That power eventually drove her mad and led to the death of an entire planet of asparagus-people, with Jean eventually sacrificing herself to avoid further bloodshed by her own worst impulses in the form of Dark Phoenix.

At least, that’s what everyone thought had happened…

We begin with the Fantastic Four (whose membership at this point includes She-Hulk instead of The Thing, after his decision to stay behind on the planet of the Secret Wars some months earlier) returning to Earth after a protracted adventure in space.  (If you’re wondering what it was all about, you’ll have to keep wondering, as that story has never been told.  Reed even gets in a remark about the “people who make their comic adventures” believing that cosmic stories don’t sell, which feels like a dig by writer/artist Byrne against his editors.)  Reed attempts to get clearance to land at JFK, since the Baxter building was recently blown to smithereens, but is waved off to LaGuardia Airport instead.  They FF then hurry to Avengers Mansion, their temporary headquarters to find out what they’ve missed… I really love the background flirting between She-Hulk and Hercules (which she explains later in the issue as her way of trying not to get too into the demigod, as she has a bit of a harmless crush on him), but the real story here is about the crash that closed JFK Airport.  The Enclave, a group of sinister scientists who once created Adam Warlock, tried to escape the Avengers and ended up in Jamaica Bay.

That’s when things got weird…

The accident led to the discovery of a strange cocoon beneath the water, which actually tried to fight off the Avengers before being brought back to the mansion.  The Invisible Woman, with great effort, manages to make the strange structure invisible, revealing… …the body of Jean Grey, dressed as she was when she escaped Starcore years earlier!  The heroes assembled don’t immediately recognize her as Marvel Girl, but the revelation puts Reed in research mode, while the rest of the Fantastic Four set out to get rest and/or reconnect with their significant others.  Reed works for hours, accompanied only by Captain America and the tireless Hercules, before he successfully manages “biostimulus of the conscious mind” of Ms. Grey.  This causes a bit of surprise, as the input causes everything in the mansion to start floating around as if in zero gravity! Reed hits the literal panic button, opening the strange casket to reveal an angry Jean Grey, now wide awake and believing herself surrounded by more android duplicates.  (It makes perfect sense, as the issue right before her “death” featured the X-Men fighting androids in the form of the original five founding mutant heroes.) Jean gets the better of the trio of heroes, only to be laid low by Susan Richards powers, which for some reason counter her own telekinetic force.  (Another nice moment, given that the use of Sue’s force fields and Jean’s traditional telepathy have led to similar visualizations over the years, and especially since both women started out as Stan Lee “housewife heroines.”) Jean’s references to the X-Men set off Captain America’s razor-sharp memory, and he recognizes her as Marvel Girl from their previous interactions.  Jean explains her last memories, realizing that she’s been in her chrysalis for some time, expressing that she needs to get back to the X-Men.  Her shock deepens when Captain America tells her that the X-Men are currently personas non grata, associating with the mutant monster known as Magneto (which is actually true!)

Moved by Marvel Girl’s plight, and barely recovered from her own trauma at the hands of Psycho-Man, Sue takes command, informing the leaders of the two greatest super-teams extant that they’re doing things her way…

…and THEY LISTEN.  Taking a Quinjet, the group makes their way to the Grey home in upstate New York, in the hopes that Jean’s family can help to explain.  They find an empty home, but when Hercules picks up a strange paperweight, things get even more complicated! Even three decades later, I’m still amazed at how perfectly this plot dovetails together, as that crystal was given to Jean by Lilandra of the Shi’Ar and later gifted to the Grey family, containing as it does the essence of their “deceased” daughter.  As such, it contains a complete psionic memory trace of what happened to Jean after her memory stops, leading to a shocking revelation…

At least, not yet.  While Captain America scours the Avengers files for information (which also recounts for readers the history of Jean as Dark Phoenix, in case we missed an issue or two), Jean recaptures the truth of what happened in the shuttle right before it crashed into the bay, as an alien force confronted her at the moment of her death, giving her the one thing she wanted more than anything else: To save her friends and live through the experience. (At this point, we must note that this portion of the story comes from a plot idea from a young Kurt Busiek, and is NOT what John Byrne had intended to do; per Byrne, this flashback was reworked by X-Men writer Chris Claremont and artist Jackson Guice, who were about to become the regular creative team on X-Factor, for which this story serves as plot springboard.)  Reed, Sue and Hercules were able to witness the entirety of the event as well, all of them knowing in their hearts that this is the true history of what happened, and that they now stand with the one, true Jean Grey, another really strong character beat that helps to cement this as an above-average use of retroactive continuity.  Her real body was left to heal in the bottom of the bay, a fact confirmed by Captain America, arriving with the missing pieces of the puzzle.  Then, this happens… It is no accident that those words, absolving Jean for the murder of a billion D’bari asparagus men come from the mouth of Captain America, elder statesman and unbending paragon of truth and justice.  It’s absolutely intentional and succeeds in putting the final nail in the coffin of doubt: Jean Grey is a live and well, and it was actually her humanity that kept the Phoenix from running rampant across the multiverse.  Captain America said so, y’all.  This serves a dual purpose, in that it keeps Jean’s heroic moment at the end of the Dark Phoenix Saga intact, but also makes it clear that one of our heroes is not a mass-murderer after all, a win/win scenario.  Fantastic Four #286 rolls right into the first issue of X-Factor, the book that reunites the five founding X-Men (with a problematic new gimmick) for the first time EVER, leading to many less-successful and carefully crafted retcons down the line, but this issue pulls off a truly difficult proposition with skill and flair, making for a rare Retro 5 out of 5 stars overall.  Byrne’s confident art (plus the assist from Chris Claremont and inker Terry Austin, the rest of the team that killed Jean back in X-Men #138 in the first place) combined with an intricate and well-thought-out retcon plot makes this one a winner for me…

Perhaps the best thought-out retcon of all time, taking threads from half a dozen different places and knitting them into a story that works without negating or demeaning what came before...