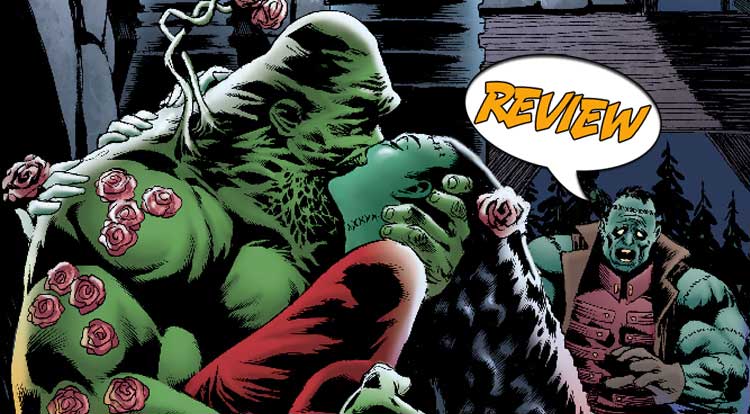 Love is strange, Faithful Spoilerites, and nowhere is that more true than the monstery corners of the DC Universe.  Your Major Spoilers review of Young Monsters In Love #1 awaits! Previously in Young Monsters In Love #1: “It’s hard being a monster…  and even harder being a monster in love.  Sparks will fly and hearts will be broken when the ghouls and ghosts of the DC Universe assemble to bring you the Valentine’s Day Special that no one saw coming!”

There was a time when 80-Page Giant comics were everywhere, costing more than TWICE as much as your normal comic at a whopping 25 cents.  This book is like that, only more so, featuring TEN stories set in the DCU, though seemingly at different points in the various reboot eras.  As with any anthology, the quality of stories varies (my favorites are the Man-Bat tale, featuring Kelley Jones art, Frazier Irving and Mark Russell’s take on Swamp Thing and a really lovely Deadman story written by Paul Dini) but they are all linked in one way: They almost universally don’t have a happy ending.  The idea of a twisted collection of Valentine’s stories is nice, and the concepts are quite clever (Mairghread Scott’s story features Superman and Superboy handling Solomon Grundy on the day of his anniversary, helping to get him to his late wife’s grave with minimal casualties, while the Frankenstein story is told through a love letter to The Bride of Frankenstein, featuring a heart-breaking ending) and all of the stories feature inspired art.  There’s only one big drawback to this issue…

KINDA PRICEY, BUT WITH SOME GOOD STUFF

…its TEN DOLLAR price tag.  A normal $2.99 comic from DC features 20 pages of story, making this one four times the size for only three times the cash.  It’s always hard to judge an anthology, but the weakest story in this issue (I’m not saying which one, since you likely won’t agree) is still a solid 3-star affair, even with the sheer number of bittersweet endings.  None of our art teams drop the ball either, with John McCrea’s take on the Creature Commandos deserving special notice, making the whole issue visually pleasing and more than occasionally beautiful.

This issue wins my affection for the inclusion of Frankenstein, Man-Bat and the use of Monseiur Mallah and The Brain, whose love makes for one of the most touching stories in the issue, thanks to Steve Orlando and Nic Klein as well as a guest-starring spot by Maggie Sawyer of the Metropolis PD…

In short, this is a very good issue that shows off both the positives and the negatives of the anthology format, in that there are a lot of under-served characters in these pages getting some meaningful attention from talented creators, and the length of the book makes for a good solid couple of afternoons of reading.  Young Monsters In Love #1 has a lot of things going for it creatively and conceptually, with some excellent art and story, with the only black mark being an exorbitant price for the package, earning 3.5 out of 5 stars overall.  I say it’s worth it…

A true mixed bag, but none of the tales fall below pretty okay, and a couple are inspired. Worth the time if you can spare the price...