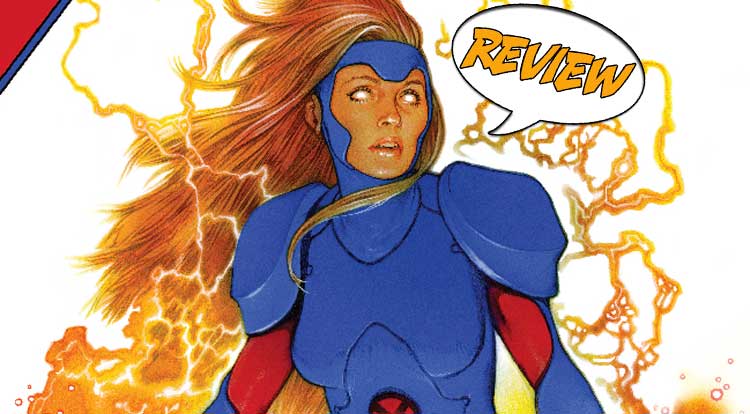 She’s only been back from the dead for a little while, but Jean Grey already faces a crisis so great she must forge a new team of X-Men…  Your Major Spoilers review of X-Men Red #1 awaits! Previously in X-Men Red: “JEAN GREY is back! Returned to a world she doesn’t recognize, the First Lady of the X-MEN gathers an unlikely team – NIGHTCRAWLER, NAMOR and LAURA KINNEY (A.K.A. ALL-NEW WOLVERINE) – to face an evil that threatens to tear down XAVIER’s dream by any means necessary!”

THE DREAM OF CHARLES XAVIER…

As with most comics these days, we open in mid-story, with a young girl named Heather awakening to a whispering voice, warning that “they” are coming to get her.  She tries to flee, only to find that a torch-wielding mob is busting down her door, out for blood.  Heather nearly escapes, only to slip and fall, finding herself at the end of a gun…  held by her own mother!  Fortunately, the X-Men arrive to save her in the form of Nightcrawler, Wolverine, Honey Badger (Wolverine’s younger clone sister) and the recently resurrected Jean, who teleport her away to safety.  Cut to two months earlier, with another last-second save of a young mutant, leading Jean to realize that anti-mutant sentiment is at a level she’s never seen before.  Gathering an army of the greatest minds in the world, she telepathically links them all together and comes up with The Plan that she hopes will save them all.  Her effort leads her on a recruiting drive that includes Prince Namor and an address to the United Nations wherein both Namor’s Atlantis and T’Challa’s Wakanda recognize her idea: A Mutant State dedicated to the protection of Homo Superior.

…IS NOT THE ONLY DREAM OUT THERE

To their credit, the creators reference both Utopia and Genosha, previous attempts at a similar concept, and the reveal that the UK Ambassador to the U.N. is possessed by X-villain Cassandra Nova (likely the big bad of this arc, if not the series) is handled very well, with a last page that makes it clear that Jean’s Grand Idea won’t be an easy one to pull off.  Mahmud Asrar’s art is excellent throughout the issue, especially the no-costumes-or-fights sequence taking place in the United Nations, and he has finally made Jean’s traditional weird headdress/face cowl thing look good, and her new costume is the best one she’s sported since she gave up the green minidress of power.  I’m a little concerned about the familiarity of this premise, but King’s script ties the anti-mutant sentiment into real-world unrest in a way that gives it a little more metaphorical oomph, and I like the balance of Charles Xaver’s first student taking up the banner of his dream against his own twin sister.  Add in Jean’s gentler take in this issue, and it’s a story I’m interested in more of…

BOTTOM LINE: IT HAS POTENTIAL AND LOVELY ART

Given how much of modern pop culture is referential, reworked or reused, I can’t hold too much against this issue’s “unite the mutants in one homeland” plot hook feeling familiar.  X-Men Red #1 looks amazing, which goes a long way, and has strong character work and a nicely balanced cast, earning a better-than-average 4 out of 5 stars overall.  As someone who isn’t always into X-Men as a property, I’m happy to say that I’ll be following this one to see what happens with Jean and her motley crew…

A familiar premise, with a twist, and some excellent art, plus a fascinating team lineup...