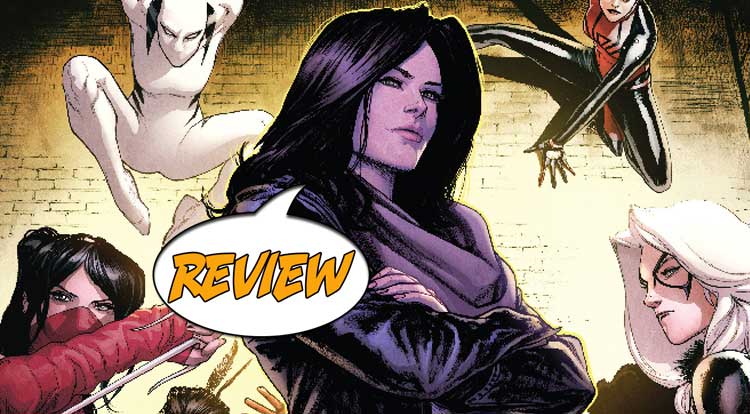 The Defenders’ war with Diamondback heats up…  Time for reinforcements!. Your Major Spoilers review of Defenders #9 awaits! Previously in Defenders:  “Harlem burns as the Defenders push back against the bloodiest gang war in Marvel history.  Some will rise, some will fall and there will be new Defenders…”

We open in an NYPD station (which naturally means that Bendis’ running gag of characters being booked in cosplay outfits and shouting about things actually happening in the comics continues) where Jessica Jones is literally begging Misty Knight for a few seconds with The Punisher, who has once again been incarcerated for his crazypants behavior.  She gets her moment and the lead that takes the Defenders head to head with Diamondback, who has recruited former Masters Of Evil Titania, Moonstone and The Fixer to his side.  Cue the massive battle, complete with asides and brutal back-and-forth between no-nonsense Jessica and manipulative Moonstone.  It’s a great example of what Bendis does best, and in the midst of it all, Luke Cage makes a phone call and says the important words: “Bring everyone.”  Diamondback’s drug enhancements get Cage on the ropes, when suddenly shots ring out in the alleyway…

LOOK FOR THE BENDIS CAMEO

Rather than more Punisher, we find that the gunner is The Black Cat, followed in quick succession by Elektra, The White Tiger, Echo, Spider-Woman, and the Daughters Of The Dragon, creating the most wonderful thing I’ve seen in a super-team in a long while: An 8 to 3 split of women to men.  The final lines of the issue promise closure on the matter of The Hood, one of the worst characters in Marvel’s stable, so I’m kind of thrilled, and Marquez’ art is lovely.  Of particular note is the moment where Diamondback stops fighting Iron Fist just in time to see Luke Cage in silhouette, hefting an SUV over his head to hurl at his oldest foe.  His response: “Damn.”  I’m really psyched to see how this all shakes out in the next issue or two…

THE BOTTOM LINE: SWAN SONG, PERHAPS, BUT A GOOD ONE

This issue is very well-paced and constructed, bringing together a large group of heroes ala the old-school Defenders, featuring nice character work and dialogue and excellent action sequences, leaving Defenders #9 with a very impressive 4.5 out of 5 stars overall.  While there are some questions for me about Black Cat’s status and where/when the story works within all the players’ time frames, it’s a nice team book with a great cliffhanger ending.

A tightly-plotted, fun story with strong art. I just hope some of the guest-stars stick around...