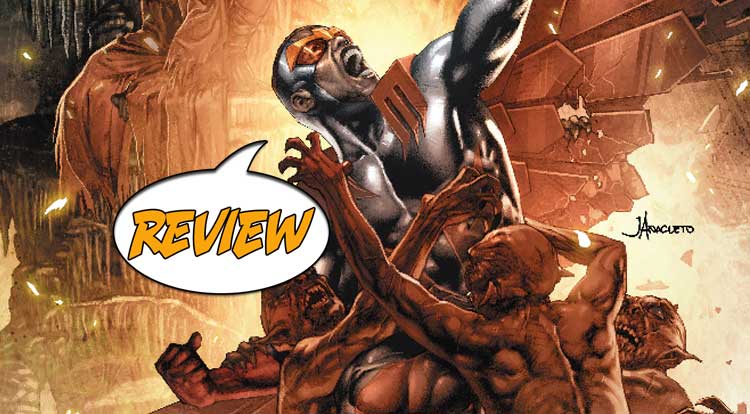 Previously in Falcon: “Falcon and Patriot tried to broker a truce between warring gangs in Chicago — but Blackheart, disguised as the major, was spurring both sides to violence.  As riots raged across the city, Falcon and his allies tried to take the fight to Blackheart, but the son of Mephisto responded by ripping the soul out of Sam’s body!”

This issue opens shortly after the last, with Patriot on a panicked phone call to his mother.  Falcon’s body is safe, but catatonic, and Patriot blames himself for his mentor’s situation.  Fortunately, mom is on the scene with some wisdom, not only reminding him of his own strength but inspiring him to contact the OTHER Falcon, Sam’s former partner, Joaquin.  While Sam Wilson suffers in Mephisto’s realm, thanks to a spectre of the Two-Gun Kid and his own self-doubts, Joaquin and Patriot engage the gang wars engulfing the city, and Doctor Voodoo returns with a man well-versed in dealing with the underworld: Daimon Hellstrom, once known as The Son Of Satan!  With the help of Joaquin’s and Sam’s three-way mindlink with pet falcon Redwing, Jericho’s magic and Daimon’s distractions, Sam Wilson is given a way out of hell, as long as he can do one thing: Remember who he really is!

LOTS OF GUEST STARS AND SOME DEEP PHILOSOPHY

This issue takes a lot of the weird bits and bobs around Sam’s history (the multiple retcons of his back story, the Cosmic Cube-created evil Steve Rogers, his own doubts about becoming Captain America and more) and weaves them all into an engrossing conflict that helps to explain Sam Wilson as a man and a hero.  The smart use of The Falcon, Doctor Voodoo and Son Of Satan makes the story feel like it takes place in a grand, shared universe in the right ways, but the story also makes it clear that current cast member Deshaun “Patriot” Lucas is equally important.  I love the art throughout this issue, especially the subtle moments in Mephisto’s hell and the hotel room of mystic importance, and Cassara’s Mephisto borders on pants-wettingly awe-inspiring…

With his high-profile role as leader of The Avengers and his own reclaimed super-identity working together, Sam Wilson feels like he has earned his place at the top echelon of Marvel’s heroes, and I was psyched to see him back in the Falcon gig.  This issue proves that my instincts were justified, with strong art and a well-constructed story combining to make Falcon #4 a strong read, earning 4 out of 5 stars overall.  If you worried that giving up the shield meant Sam was going to get thrown back down to a lower tier (not that I believe in the theory of A, B or C List Heroes, mind you), this issue makes it clear that The Falcon is still in the game.  I approve…