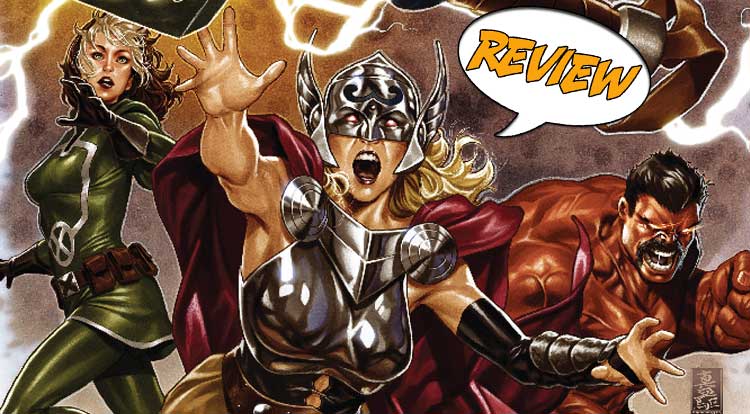 After impulsively rushing into battle, Quicksilver has left frozen at the mercy of the fists of The Blood Brothers.  Have we seen the last of Pietro Maximoff, the fastest jerk alive?  Your Major Spoilers review of Avengers #678 awaits! Previously in Avengers: “The Earth has been stolen!  The sky burns while mysterious cosmic objects crash down from above, wreaking havoc across the world!  Most of the world’s heroes and villains have been trapped in a mysterious stasis, leaving behind only a handful of Avengers as the world’s last line of defense.  The Avengers divided into team to investigate the dangerous, pyramid-shaped objects that the Lethal Legion and the Black Order are fighting over in Rome and Peru.  Quicksilver, who was recently fired from the Unity Squad, couldn’t stand being left behind and raced from Avengers HQ to join the action in Rome.  But just as he was about to claim one of the mysterious objects, The Scarlet Witch was able to life the stasis on Vision — by unknowingly transferring his frozen state to her brother…”

WILL AN AVENGER PAY THE ULTIMATE PRICE?

This crossover has been one of the most cohesive I can ever recall, streamlining three large teams into a unified (sorta) group of Avengers, minus most of the lynchpin leader-characters who could effortlessly pull off the coordination of so many heroes.  That means that overall leadership is in the hands of The Falcon, whose team is trapped in the middle of a massive ongoing battle between the Lethal Legion and the Black Order while trying to keep members like The Human Torch on-task.  In Rome, Quicksilver has taken a vicious beating, but in-fighting between the two villain groups saves his life, albeit barely.  Voyager evacuates him and an injured Cannonball, leaving Rogue, Hercules and Thor to witness one of the alien combatants finding the strange pyramid they’re fighting over…  and get vaporized!

Meanwhile, on the other side of the world, The Human Torch is making his way to another of the unbeknowst-to-him utterly fatal pyramids…

After last issue’s cliffhanger, this issue’s could feel like overkill, but the writers make it all work, and once again keep the personalities of the Avengers unique and in-focus throughout their chaotic battle.  Better still, they give nuance to villains such as The Metal Master, who is felled by his own arrogance and the Blood Brothers who…  are big, strong and dumb.  Pepe Larraz delivers some impressive battle sequences, and provides subtlety to the art even when dealing with red skies, burning seas and dogs and cats living together…

Well, maybe not that last one?  But even so, the visuals are impressive and the scale issues that previous installments gave us with Rogue’s giant mall-chick hair are finally overcome and even the Red Hulk looks amazing and heroic under his pen.

BOTTOM LINE: SOMETHING IS WRONG WITH VOYAGER

Almost unnoticed among the chaos is a moment where The Scarlet Witch awakens The Vision, who sees Voyager briefly and wonders who in the hell she is before being once again frozen, supporting my theory that there’s a lot more to her than the story provided implies. (I don’t think she’s actually an Avenger at all, you guys, but they’ll get to that eventually.)  In short, Avengers #678 hits a lot of the right notes while teasing at what the overall game is (Hint: The Grandmaster is involved), with strong art and great character work, earning 4 out of 5 stars overall.  It’s really nice to see a massive planetwide crisis crossover done in a way that doesn’t forget the micro in blowing up the macro, and this creative team clearly knows how to pull off that rare feat…