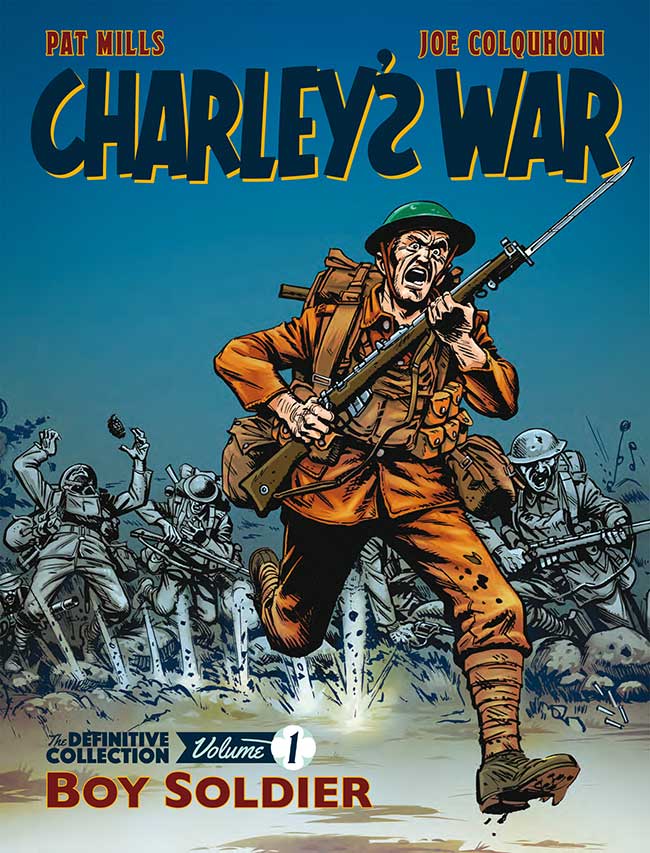 Considered by many as the most important war story to appear in comics, a new definitive collection of Charley’s War to mark the centenary of the end of the First World War leads the 2018 schedule from The Treasury of British Comics.

Celebrating a year since its launch in June 2017, the Treasury of British Comics continues its mission to bring some of the classic British of the 1970s and ‘80s comics back into print. Deeply affecting, unsparingly hard, and unflinchingly political, Charley’s War follows a sixteen-year-old working class lad who eagerly signs up in 1916 but has his idealism quickly shattered in the hellish world of trench warfare where every day is a bitter fight for survival. A must for every book shelf and school library, this all-time classic of the medium features bold writing from Pat Mills (Nemesis the Warlock, Marshal Law) and breath-taking artwork from Joe Colquhoun. The first of three omnibus volumes will be released in April, with the next volumes due for release in May and June.

The Treasury of British Comics also continues its collections of never-before-reprinted girls comics, beginning with the first volume of stories from Jinty, featuring The Land of No Tears where, while undergoing surgery, Cassy Shaw is transported into a dystopian future in which people with genetic defects are regarded as second class citizens; meanwhile The Human Zoo sees twin sisters Shona and Jenny kidnapped along with their classmates by a superior race of telepathic aliens. Will the twins ever be able to reunite and escape by to Earth? And in the third volume in the popular reprint series of stories from the supernatural horror comic for girls, Misty, Lona begins to exhibit supernatural powers which, unknown to her, are the result of her being raised by wolves as a baby in Wolf-Girl.

These will be complemented by two horror classics from the 1980s – The Thirteenth Floor from Scream! and first volume of Black Max from Lion and Thunder! Sentient and demented caretaker computer Max routinely murders people after luring them to his tower block’s secret thirteenth floor in one of the British comics’ creepiest and most iconic characters. Devised by writers John Wagner and Alan Grant and artist José Ortiz, The Thirteenth Floor is a classic horror in the style of a science-fiction-tinged Penny Dreadful. Written by Ken Mennell and drawn by Eric Bradbury and Alfonso Font, Black Max is World War One evil flying ace Baron Maximilien Von Klorr who has trained two giant bats to attack British aircraft. Believing himself to be descended from the fabled Bat People, he is continually opposed by Lieutenant Tim Wilson of the Royal Flying Corps in a war comic with a horror twist! Born a slave in Alabama, he became a bandit in Mexico and returned to become the scourge of the American Civil War! El Mestizo is a unique character from the heyday of British comics. Created by writer Alan Hebden and artist Carlos Ezquerra, and published in Battle Picture Weekly, El Mestizo is a Spaghetti Western meets Django Unchained as a black mercenary faces both danger and prejudice in the crucible of the Civil War.

The year ends with another volume from one of the masters of 20th Century comic art, Ken Reid. His Creepy Creations were a poster feature on the back page of every issue of Shiver and Shake between March 1973 and October 1974, all drawn by Reid in response to a sketch and title sent in by a reader. From The Mersey Tunneller to The Money-grabber of Montrose, these gruesome grotesques demonstrate Reid’s incredible talent for invention and subversion. This hardcover edition follows the critical success of 2017’s collection of his Faceache one-page comedy strips.

via Treasury of British Comics