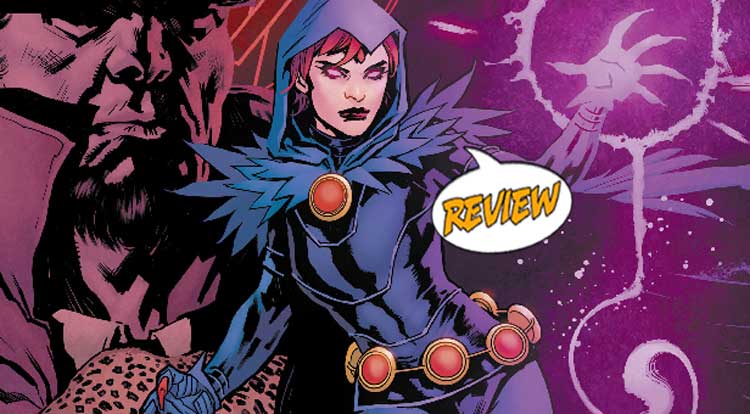 It’s hard to be a teenager.  It’s even harder when your demon half wants to leap out and conquer the whole Earth in the name of your evil dad…  Your Major Spoilers review of Raven: Daughter Of Darkness #1 awaits! Previously in Raven: Daughter Of Darkness: “Raven faces a new, otherworldly menace that is all too grounded in reality.  Plus, Raven’s personal life is in an uproar as her mother and aunt struggle for the soul of a Titan!  It’s up to Baron Winters of the Night Force to intercede on her behalf as she embarks on the adventure called ‘The Girl With the Anime Eyes’!”

Things open with a flashback to several months ago, as something breaks free of a stasis pod at a lab called 2MorrowTech.  Jump forward to the present day, where Rachel Roth (aka Raven) and her new friends are having a bonfire on the beach.  It’s a strange moment for me, having been absent from much of Raven’s New 52 story due to the hideous mess that was her redesigned costume with the feathers on the face.  Things quickly get complicated as Raven gets involved with a fleeing girl, only to get blindsided by… TRIGON!!!!

Or perhaps not, as the girl being pursued seems to be able to project illusions, throwing the once-and-future Titan off the trail.  After returning home, Raven finds her way to 2MorrowTech to discover that the girl’s name is Azure and the issue’s title is VERY descriptive…

SO IS BARON WINTERS

Also present in this issue is the leader of Wolfman’s Night Force, Baron Winters, who is keeping mystical tabs on Raven for reasons unknown, but I have to say that it’s kind of neat to see him back in a DC book for the first time in years.  Pop Mhan’s art in this issue is pretty okay as well, and the design of Raven’s new costume (while still over-designed and noodly as heck, especially in the feather-accents that make up the shoulder area) is at least better than the feather-face version and is also evocative of her Teen Titans animated self.  Wolfman’s story doesn’t feel like the first chapter, even though it’s well-constructed, leaving the whole issue somehow feeling disconnected, with much of the mystery folded under what seems to be a continuation of a previous comic that I haven’t read.

BOTTOM LINE: THAT FINAL PAGE, THOUGH

This issue does succeed in feeling like a discreet chapter with a beginning, an end and a compelling story in-between, leaving Raven: Daughter Of Darkness #1 with a right down the middle 2.5 out of 5 stars overall.  It’s not a bad issue, by any means, but it is one that just doesn’t quite pull it all together for a fully-rounded comic book experience.  Hopefully, the completed 12-issue arc will coalesce into something that ends up being satisfying…