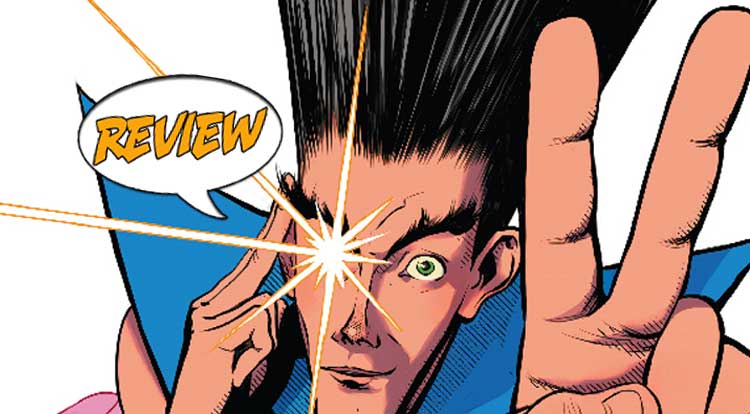 David Haller is headed east, searching for the solution to the voices in his head.  Sadly, those voices have ideas of their own…  Your Major Spoilers review of Legion #1 awaits! Previously in Legion: “Born the illegitimate son of famed mutant activist Charles Xavier, David Haller’s past is marred by trauma, both physical and psychological.  But he doesn’t bear this weight alone: Hundreds of unique personas, all with separate mutant abilities, live within his mind.  He is many.  He is LEGION…”

We open with a local weatherman, extremely confused by the madness that is happening with his meteorological phenomena, only to find David Haller literally in the eye of the storm.  David/Legion finds himself taunted by one of his personas, a new one called Lord Trauma, who not only preys on him but those who try to help him.  Picked up by an Amish couple, he ends up in a small-town emergency room, where Trauma attacks everyone present and in tried-and-true Peter Milligan fashion, everyone has terrible, uncomfortable secrets to hide.  It’s really disturbing stuff, which doesn’t really relent when Legion escapes to track down a well-known psychiatrist-to-the-stars whom he believes can help him.  Her hallucinations under the influence of Lord Trauma are gut-wrenching, and as the issue ends, David arrives just in time to keep her from being consumed by his alter-ego, with a message: “I need your help.”

So, here’s a thing: I remember being a teenager reading New Mutants comics when Legion first appeared something like fifty-seven years ago, and being super-confused by Bill Sienkiewicz’ art  As such, the retro nature of this issue, from David’s portrayal to his little blue cover all to the Sienkiewicz-style telepathic projections appeals to me.  The good part is that those bits aren’t the whole point of the story, they’re just there to entertain people who remember the New Mutants of the 80s, with a story that goes places that those books never could.  Alfredo Torres does a great job with the art in this issue, providing a solid, real world that makes it even more awful when things start twisting and mutating into nightmarish hallucinatory scenarios.  I haven’t been watching the Fox TV show, but if it’s this unnerving, I suspect it might be worth looking into.

If you’re one of the people who only know Legion as the catalyst for the Age of Apocalypse, this book will serve as a compelling look into the character’s inner life (which has more meaning here than it does in many comic books.)  Legion #1 is well-drawn, intentionally and effectively disturbing and has lovely dialogue throughout, making for a better-than-average 4 out of 5 stars overall.  I’m kind of hoping this means we’ll be seeing more Milligan at Marvel, too…

Dark and disturbing stuff, but a really good read.