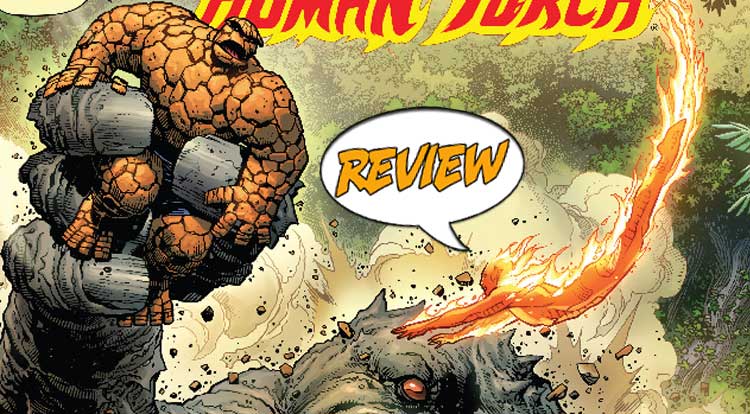 Ben Grimm and Johnny Storm are working together again, looking for the last legacy of the Fantastic Four.  Of course, Ben may not have given his junior partner all the information about their fallen family members…  Your Major Spoilers review of Marvel Two-In-One #2 awaits! Previously in Marvel Two-In-One: “Doctor Doom alerted Ben Grimm, AKA The Thing, to a message Reed Richards left behind in the event of his death.  It contained directions to the Multiplane, a device that would allow the remaining members of the Fantastic Four to explore the wonders of the Multiverse together.  But when Ben tracked down Johnny Storm, he found a Human Torch ravaged by grief and losing his powers.  Unable to hurt Johnny further, Ben lied about the contents of the message and said that Reed and Sue might still be alive…

BACK TO MONSTER ISLAND

After last issue’s sudden discover of Reed’s (for lack of a better word) Last Will And Testament and Ben’s big lie, this issue opens with our ever-lovin’ blue-eyed hero worrying to his ex, Alicia Masters.  Ben is afraid that his untruth will put the final nail in the coffin of his friendship with his flaming “brother”, and Alicia urges him to come clean.  Instead, the Fantastic Two head off for Monster Island, the site of the FF’s first adventure together.  Once they arrive, though, the end up stepping right into a conflict between The Mole Man and Googam, Son Of Goom, who are clashing over the leadership of the subterraneans.  Things go from bad to worse when the two would-be rulers decide that whichever leader’s people beat down the remaining FFers first will win the crown of monsters.  Johnny’s powers give out at the least possible moment, and all seems lost until Victor Von Doom/Iron Man saves their bacon.  It’s this interaction that reminds Ben what Reed would have *really* meant by “our first adventure.”

THEY REFERENCED LYJA AND THE SECRET WARS???

First off: THE OLD BATHTUB FANTASTICAR IS BACK!  Woo hooo!  This issue’s script is just charming as heck, especially when we flashback to college where Reed and Ben pranked Von Doom by changing his name on a trophy to “Victor Von Doof” and apparently repeatedly broke back in to revert it every time the school corrected his vandalism.  As for Jim Cheung’s art, it’s truly beautiful, especially the moment where Ben and Johnny are descended upon by hordes of Subterranean mutants, and this art team even makes Johnny’s strangely bland new Avengers costume look amazing and cool.  I have to say, I have missed Fantastic Four stories, and this one’s balance of crazy monsters, scientific wizardry, clashing with Doom and a little sophomoric humor makes for a lovely reminder of what I like about classic FF.

BOTTOM LINE: HOPING FOR MORE OF THIS FANTASTIC FOUR

It’s been several years since the FF’s regular adventures were halted, and as far as I’m concerned, it’s high time we get a real Fantastic Four comic once again.  Even so, Marvel Two-In-One #2 makes for a fine placebo, with excellent art by Cheung and a lovely balance of science, drama and fun moments, earning a well-deserved 4 out of 5 stars overall.  If there’s any justice to be had, this series will end up with Reed and Sue’s return and a massively hyped return for the real, full Fantastic Four.  If not, I hope at least we get to see The Thing and The Torch messing with Doctor Doom for an issue or three…

Adventure, emotion, humor and drama, all wrapped up in a stellar art job...