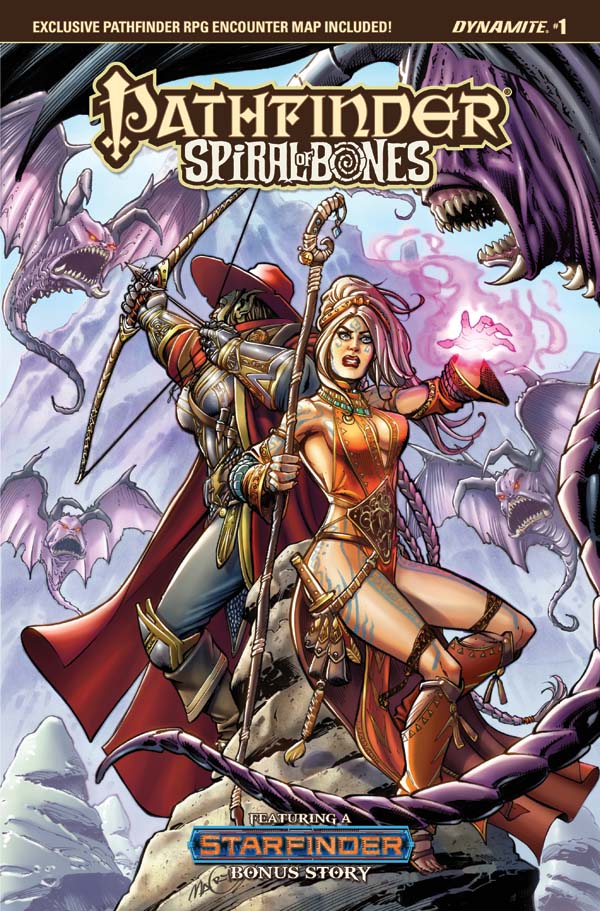 Crystal Frasier has been working for Paizo since 2009 as a writer, developer and graphic designer for the Pathfinder roleplaying game. Now she’s adding comic book writer to her credits, penning the five-issue Pathfinder: Spiral of Bones arc for Dynamite, which goes on sale March 21.

Along with providing a look at some of the action-packed pages in the first issue, Frasier talked with Major Spoilers about killing characters and the joys of turning fan speculation into canon.

MAJOR SPOILERS: What are your goals for this series?

CRYSTAL FRASIER: I think my biggest goal for this series is to highlight Valeros, our fighter, who is a nice enough guy but kind of sits in the background a lot with the Pathfinder comic books arcs. You’ve got sorcerers and wizards and clerics who also cast these big impressive spells and fantastical creatures like elves and dwarves and Valeros is just this human guy with a sword and a tankard. He does well enough and he loves his friends, but he doesn’t quite feel like he measures up. This is my chance to play with that and see what makes him tick and why he sticks around with this group and just the sort of person he is.

MS: Was it your idea to do a comic surrounding Valeros?

CF: Yeah. [Paizo publisher] Erik Mona gave me basically free reign to pitch a comic book script and two of the things I wanted to include were Imrijka our half-orc inquisitor and psychopomps. Those were natural fits because Imrijka works for Pharasma, the goddess of death and psychopomps work for Pharasma as well. It was just an issue of figuring out how to get Valeros in the middle of weird struggles involving the goddess of death and the easiest way was to kill him.

MS: The first issue ends with Valeros’ death. What can you tell me about what’s next?

CF: I had a lot of fun with that cliffhanger. Spoiler alert it’s roleplaying games plus comic books so people don’t stay dead. One of the fun things about roleplaying game mythologies is heroes come back from the dead a lot. A little bit of this is going to be looking on what happens on the death side when you’re an adventurer and you live a weird life and get shuffled off the mortal coil. The next issue follows Valeros in the Boneyard as he goes through a trial to determine whether he’s supposed to go to heaven or hell or one of the other eight outer planes where souls can wind up depending on the gods they served or the kind of people they were in life. There are all kinds of weird legal shenanigans that go on and we find out that Valeros isn’t as dead as he thinks he is.

MS: What made you decide to mix action and romance in the first issue?

CF: I love writing action and I love writing romance. Plus, for a long time Valeros and Imrijka have been kind of a fan favorite coupling and I’m definitely in that school. Given both of their personalities, it makes perfect sense that if they knew each other they’d probably have some kind of backstory or friends with benefits relationship or some kind of casual romance going on so I got to make that official.

MS: Is there a Paizo guidebook for writing the signature characters?

CF: A lot of it is just general institutional knowledge. We kind of came together and created a lot of these characters as a group and talk about how they’d react to things. We have at least a vague understanding of what their respective personalities are. Beyond that most of it is researching what other people have written for them in the comics and trying to get a sense for the voices they’d use and what works and really makes them pop.

MS: How is writing a comic different from your previous work for Paizo?

CF: The biggest difference is in a roleplaying game I only have to write half the story. You really only have to figure out what the antagonists are doing and sometimes what various supporting cast members are doing and present enough information for a game master that they can figure out what to do from there and you let the PCs be the big heroes of the story and go in and solve all the problems you’ve created. With a comic book you have to fill both roles and figure out every little detail from personality and reactions down to dialogue.

MS: How much do you keep in mind the rules of Pathfinder when writing a comic?

CF: I guess I keep them in mind so long as it’s cool. We sort of have an unofficial idea of what level the characters are now and we try to keep that in mind when it comes to what kind of monsters they fight and what kind of spells they can cast. We don’t break down all the comic book fights into round by round actions though.

MS: What are you working now?

CF: Talking to a few other people about comic pitch ideas, nothing that’s actually been approved yet. At Paizo I’m working on the War for the Crown adventure path that’s starting next month. That’s going to be a big espionage/political intrigue adventure path in one of our old fantasy/Game of Thrones-y nations. The emperor will pass, and the nation will be struggling to figure out who replaces him and the PCs will be working as secret agents.

MS: So a very good setting for Ultimate Intrigue characters?

CF: I really hope so. We borrowed some rules from that and I think smoothed over some of the rough parts a little. Fingers crossed that people like it. Every time you use a rule system that you haven’t used a lot before you’re always terrified how it’s going to turn out.