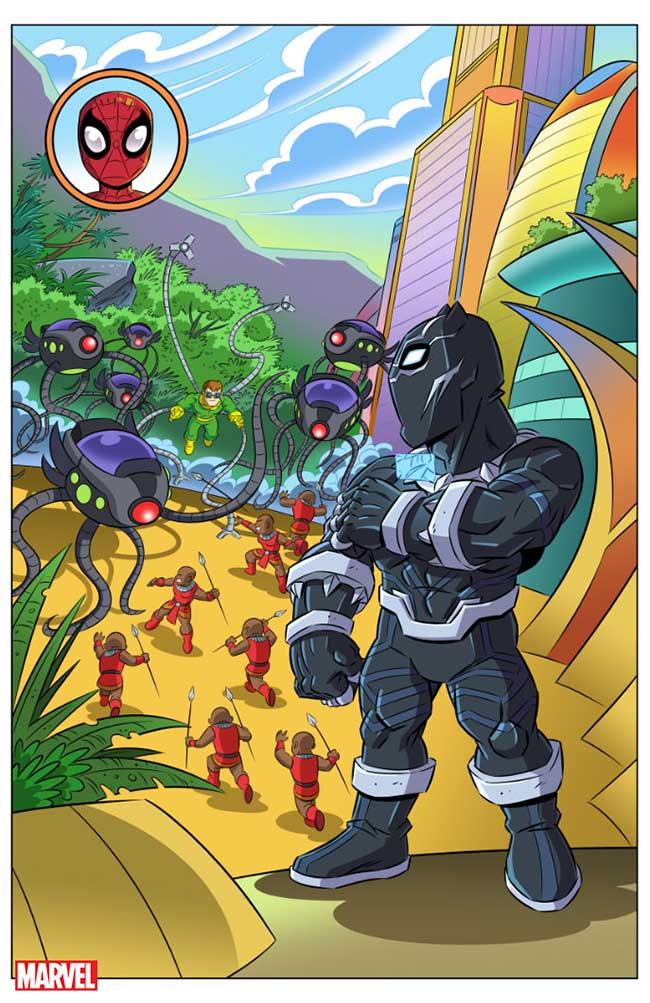 Written by Jim McCann with art by Dario Brizuela, the five-issue series features all the classic action and adventures of Marvel’s greatest heroes in kid-friendly versions. McCann’s work on the Marvel Press children’s series 5-Minute Spider-Man Stories as well as junior novelizations for Guardians of the Galaxy Vol. 2, Spider-Man: Homecoming and Thor: Ragnarok help make MARVEL SUPER HERO ADVENTURES the perfect new tale for readers of all ages to enjoy. Through stories that touch upon aspirational themes of friendship, helping others, and heroism, preschool kids and young readers will have a gateway into the Marvel Universe.

“Marvel Super Hero Adventures is a chance to introduce the great heroes of Marvel to a brand new generation in exciting stories with lessons, adventures, and action that readers of all ages have come to expect from the House of Ideas!” said McCann in a press release from Marvel. “Each issue features Spider-Man teaming up with characters both classic, such as Black Panther and Doctor Strange, and popular new faces like Ms. Marvel. Together they battle villains like Doc Ock, Taskmaster, Venom and more. This is the book you can pick up and share with anyone from your kids to your friends!”

I’m really glad to see Marvel is looking for ways to target younger readers as there really needs a younger generation growing into a rabid fanbase to keep comics alive and well.  And with Black Panther in theaters, it makes sense the first adventure will feature Spider-Man and Black Panther teaming up in Wakanda.

I hope these books appear in more places than just comic book shops though, as a wider marketplace to sell goods will draw in a more diverse and larger audience that will grow up wanting even more Marvel comics.