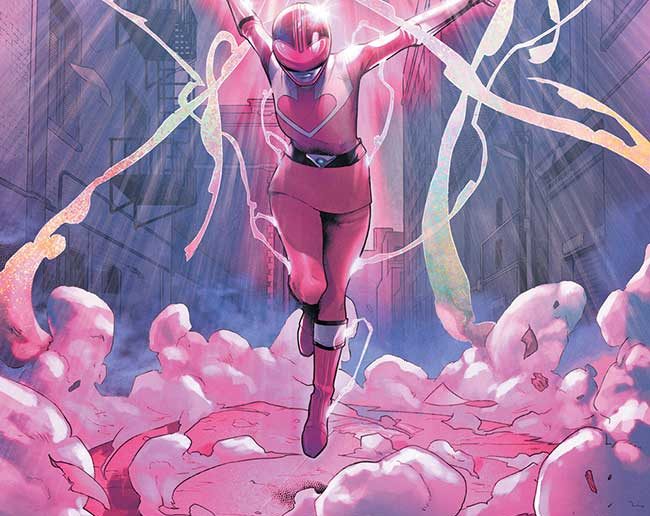 BOOM! Studios and Saban Brands are excited to announce new chapters of POWER RANGERS: SHATTERED GRID, available at comic shops in April 2018. Lord Drakkon – a twisted alternate-reality version of Tommy Oliver (AKA the Mighty Morphin Green Ranger) – has made his first, devastating move in his plan to destroy the Power Rangers and now they must strike back…but they won’t be doing it alone!

In Mighty Morphin Power Rangers #26, from writer Kyle Higgins and artist Daniele di Nicuolo, Lord Drakkon’s victory seems assured—unless the Rangers can find a way to team up with another team of Power Rangers they’ve never met before! This issue features a main cover by Jamal Campbell (Green Arrow), with variant covers by Jordan Gibson (America) and Carlos Villa (Lockjaw).

“POWER RANGERS: SHATTERED GRID delivers Power Rangers team-ups you’ve never seen before – and that all begins with the arrival of the Pink Time Force Ranger,” said Dafna Pleban, Editor, BOOM! Studios. “BOOM! Studios and Saban Brands are working closely to make sure every issue of this event feels like the biggest Power Ranger comic you’ve ever read…until the next issue, which is somehow even bigger!”

Print copies of Mighty Morphin Power Rangers #26 and Mighty Morphin Power Rangers 2018 Annual #1 will be available for sale in April 2018 at local comic book shops (use comicshoplocator.com to find the one nearest you) or at the BOOM! Studios webstore. Digital copies can be purchased from content providers like comiXology, iBooks, Google Play, and the BOOM! Studios app.