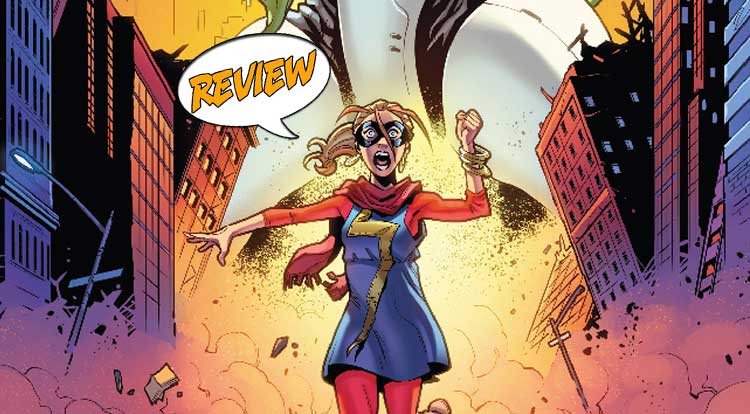 Where is Kamala Khan?  Your Major Spoilers review of Ms. Marvel #26 awaits! Previously in Ms. Marvel: “Ms. Marvel has disappeared!  As her friend Naftali tries to unravel where Kamala has gotten to, Mike, Nakia, Gabe and Zoe are also missing their favorite superhero and have tried to fill the void by taking turns patrolling in the guise of Ms. Marvel.  On her turn, Zoe ran into Red Dagger, and upon following an old man to his retirement home to investigate a rumor, they found themselves at the mercy of a rampaging lizard monster!”

This issue does not feature Ms. Marvel at all.  That’s kinda cool and a little scary from a reader’s perspective, but the story being told shows that we’re in good hands.  While Naftali searches for Kamala (whose absence is referenced, but doesn’t really seem to worry her friends terribly much, which seems odd), Zoe and Red Dagger end up defeating a giant chameleon-monster.  Well, Red Dagger does…  Zoe doesn’t suffer for lack of trying though, and even figures out that the creature looks like the work of The Inventor, one of Kamala’s villains.  Of course, The Inventor is dead, as far as they all know, but some detective work with the help of an elderly man leads her back into a villainous lair where The Inventor makes his presence known.  The next day, Mike, Gabe and Nakia realize that Zoe has gone missing, and wonder what they can do to help, when Red Dagger arrives…

First and foremost, this is a fun read, full of resourceful teens playing the superhero game without powers or special resources, and even though only Red Dagger has powers, I find myself appreciating the gang’s heroism.  I’m terribly worried about where Kamala is, but was distracted repeatedly by the clever dialogue and Nico Leon’s super-clean art.  An extended sequence in a darkened basement is a beautiful use of shading and color (or the lack of) and the giant technologically enhanced lizard is a hoot.  Best of all, none of these kids ever look like anything other than an actual kid, rather than a scaled-down adult.  The mystery introduced here (and the second mystery lying in the background) make for an engaging overall story.

Even without its title character, Ms. Marvel #26 makes for a great read, with incredibly charismatic art, engaging characters and a wonderful sense that we’re in the hands of skilled and trustworthy creators, which makes for a satisfying single-issue experiment, earning 4 out of 5 stars overall.  It’s never easy to do an installment without your lead, but as many Doctor Who episodes have proven and this issue reiterates, when it works, it’s a wonderful experience…

Even without our main character, this is a cool superhero adventures with a final page cliffhanger that I love...